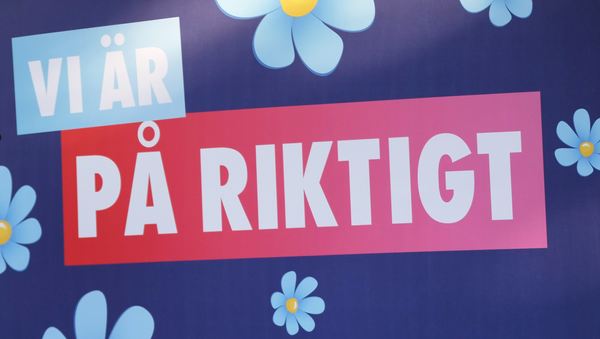 CC BY 2.0 / News Oresund / Swedish Democrats (Sverigedemokraterna)
Subscribe
International
India
Africa
Almost one in four voters would cast their ballot for what was formerly considered a fringe party, if elections were held today. According to party leader Jimmie Åkesson, its consistent focus on immigration issues is one of the reasons.

The Sweden Democrats have surpassed the ruling Social Democrats in popularity in an opinion poll for the first time in Sweden.

According to the latest opinion poll by the Swedish polling company Demoskop, support for the right-wing party is polling just shy of a quarter of Swedish voters, at 24 percent. This compares to just 22.2 percent for the ruling Social Democrats, who had their worst electoral performance in the 2018 election, securing just 28 percent of the vote.

He stressed that this trend of his party approaching the Social Democrats in popularity has been obvious in recent years. According to him, this “welcome” shift marks the end of the hegemony of the Social Democrats, who steered policy-making in Sweden for the most part of the 20th century.

“I have long argued that we would become the biggest party sooner or later. Over the years, we have consistently talked about gang crime, escalating insecurity, migration policy that has not worked, and integration policy that has made the situation worse. More and more people are experiencing these problems in their everyday lives and can relate to them. Then we become a credible alternative,” Åkesson explained.

Lena Rådström Baastad, party secretary for the Social Democrats, blamed the record losses on the recent spate of high profile shootings and explosions across Sweden, as well as the controversial compromises the party had to accept in order to resolve the several month-long crisis of power and put an end to the hung parliament. Many voters admittedly saw the alliance with the Centre and the Liberals, which have traditionally supported the “blue” right-of-the-centre bloc, as a betrayal.

“It's a damn tough situation right now, so I'm not surprised when you consider what we've got against us, with gang murders, shootings and explosions. It's us, as a the ruling party, who has to pay the price,” Baastad explained.

However, due to the aforementioned bloc politics, it is far from a given that the Sweden Democrats will enter parliament, even if they emerge as the largest party in the upcoming 2022 election. Previously, the “red-green” bloc and the “blue” blocs overcame their major differences to form a protective fence around the Sweden Democrats to bar them from entering parliament despite major electoral successes.

Nevertheless, despite this cordon sanitaire policy and overtly negative media coverage, the right-wing Sweden Democrats have gradually improved their results, and have gone from being a fringe party in the 1990s to winning 12.9 percent in 2014 and 17.6 percent in 2018.

To reflect the change, pollster Demoskop has started measuring the combined vote of an emergency conservative bloc comprised of the Sweden Democrats, the Moderates, and the Christian Democrats, as representatives of this party have become increasingly receptive to cooperation with the former pariahs. As of today, the conservative bloc has a combined 49.4 percent, beating out the left-liberal bloc and close to having a majority.

However, some old-school Sweden Democrats voters have voiced displeasure with their party increasingly making concessions to the establishment in order to “normalise” itself. These include embracing hot-button issues such as abortion and double citizenship, as well as gradually replacing figures associated with traditional nationalism.