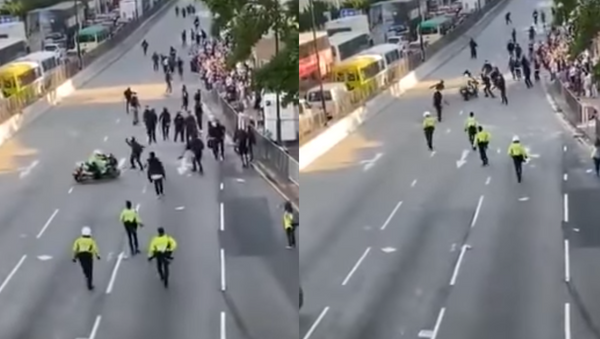 The Hong Kong Police Force (HKPF) has removed an officer from frontline duty and placed him on mandatory leave after video footage surfaced showing the cop swerving his motorcycle in and out of a group of anti-government protesters earlier this week.

During a Monday press conference, Police Public Relations Branch Chief Superintendent John Tse claimed the motorcycle officer temporarily lost his vision after protesters reportedly sprayed an unknown substance in his eyes. As a result, the cop retaliated by driving into the group of demonstrators that had assembled in Kwai Fong on Monday morning.

“[The motorcyclist] tried to separate his colleagues and the rioters. According to the officer, he was attacked with hammers and punched while driving,” Tse said during the presser, as reported by the Hong Kong Free Press.

Nevertheless, the officer has been suspended from duty and placed on leave while the higher-ups at the New Territories South Regional Police Headquarters investigate the incident.

"We understand that this is a serious matter, we place high priority on this case," the superintendent added. “Any conduct that violates internal rules will be handled seriously by the police.”

The HKPF’s decision comes shortly after the widely publicized death of Alex Chow Tsz-lok, a 22-year-old student who passed away on Friday from cardiac arrest. The Free Press reported Chow was initially hospitalized early Monday morning with a number of wounds, including a brain injury, after falling from the third floor of Sheung Tak Estate car park to the second level.

Suzette Foo, police superintendent of the Kowloon East Region, held a Friday afternoon press briefing in which she claimed officers responding to a protester-related nuisance call in the area did not know of Chow’s fall until they stumbled upon firefighters who were already treating him. CCTV footage from the scene did not link Chow to the protests.

While Foo expressed “deep” condolences for Chow’s family and loved ones on behalf of the HKPF, not all officers reacted the same way.

“Come and take revenge on us, cockroaches! We are opening a bottle of champagne to celebrate tonight, congratulations!” a riot officer said on Cable TV as protesters mourned the student’s death, reported the South China Morning Post.

Without going into detail, a police spokesman told the SCMP that the member of the police force who made the comment has since been “reprimanded” and was reminded “to pay attention to his speech and behavior.”

Protesters have since vowed to escalate demonstrations in relation to Chow’s death, which still remains under investigation and will be the subject of a public coroner’s court hearing.