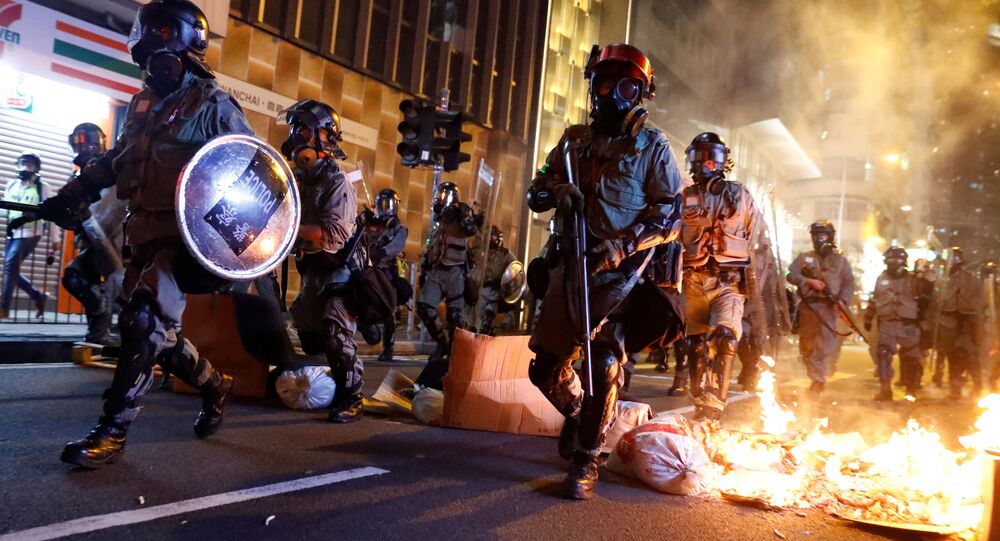 Violence, vandalism and bloodshed have consumed Hong Kong in the past few days as anti-government protests have entered their 22nd week. In examining the uptick in violence, however, it would appear that protesters’ numbers are declining at the same time.

The Hong Kong Police Force and its ranks of riot police were faced with a number of situations this weekend, ranging from roadblocks and arson to knife attacks and ear biting.

The Hong Kong office of China’s Xinhua News Agency was also the site of vandalism as protesters graffitied its walls and busted its windows.

Police have responded with crowd control equipment such as water cannons and tear gas, the latter of which has been harshly criticized by Western powers.

John Ross, a senior fellow at Chongyang Institute, Renmin University of China, who recently returned from a trip to Hong Kong, joined Radio Sputnik’s Loud and Clear on Monday to discuss his experience in the city and give a look into how demonstrators look today compared to several months ago.

Ross told hosts Brian Becker and John Kiriakou that although he recently traveled to Hong Kong, he avoided particular areas of the semi-autonomous city.

“I’m afraid that these people are very politically motivated and dangerous. They attack mainland Chinese people,” he contended, adding that they more than likely “would attack someone who disagrees with them,” such as himself.

Ross also pushed back against reports that saying the Hong Kong Police Force is being too aggressive with demonstrators in recent months.

“The idea that the Hong Kong Police have been brutal is absolutely ridiculous,” he asserted. “In the US, several people would be dead, and in a Latin American country the number of people who would be dead would certainly be measured in double figures.”

Despite not setting foot within a “riot” area, Ross said he was still able to get a view of the current demonstrations and how they compared to the initial protests that were centered around the proposed extradition bill - which has now been formally withdrawn for several weeks.

He explained that although protests were larger, less aggressive and more in line with China’s “one country, two systems” policy when they were mainly opposing the extradition legislation, demonstrations have now “been reduced to several thousand people engaged in very violent actions, and I think they’re getting isolated from the mass of the population.”

“The really big protests came from the social inequality,” Ross argued, which could possibly have been lessened if mainland China played more of a role in Hong Kong’s government and acted as an intermediary between the “billionaires - who frankly run Hong Kong - and the mass of the population.”

“But you have a hard core of several thousand, but extremely violent, demonstrators who are still active,” he said, arguing that, with less manpower to throw around, those riotous demonstrators have opted to increase their level of violence.