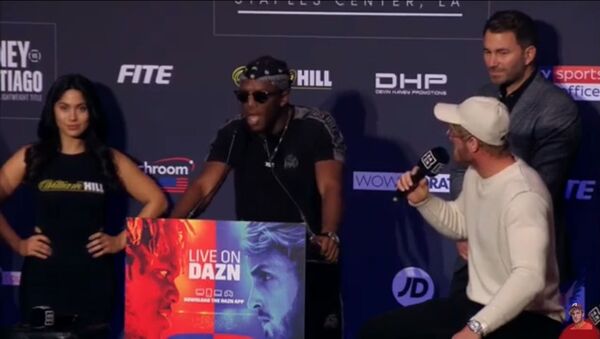 The two YouTube heavyweights, who share over 40 million subscribers across their channels, are expected to fight it out in Los Angeles today in front of a sell-out crowd and hundreds of thousands of online viewers, wrapping up a year-long online feud.

The Logan Paul vs. KSI pre-fight press conference has unexpectedly turned into a back-and-forth boxing and math quiz.

The two YouTubers, who are set to have the net’s largest white-collar boxing rematch today, lashed out at one another at a media-only event on Thursday, 7 November.

Logan Paul launched into a rant against KSI, threatening to hit him in the head “a dangerous amount of times”, but the British rapper interrupted him in the middle of his show of bravado, asking reporters: “Why don’t you try asking Logan a boxing question? Let’s see how much he knows about boxing”

“Are you gonna quiz me on boxing?” Paul retorted. “So this is boxing trivia. And this is why you gonna beat me in the fight?”

KSI went ahead and challenged Paul to name at least three boxers who fought with Muhammad Ali, but he dodged the question.

“Do simple arithmetic for me. What is 7x8?” he continued as KSI kept trying to get the conversation back on the boxing track.

“I’ll answer the Muhammed Ali question if you tell me what 7x8 is,” Paul added, with someone in the audience yelling, “You can do that!”

“I can’t do it bro,” KSI replied with an apparent sarcasm, and this is where Paul dropped the punchline: “It’s 56, you f**king dumb**s.”

Things got even more intense during the post-conference stare-down: after the pair trash-talked face-to-face for over a minute, KSI shoved his rival into the chest before security guards separated them.

Their bout, billed as “the largest ever amateur boxing fight”, took place in August 2018 and resulted in a majority draw. It has reportedly amassed over 1.05 million pay-per-view buys worldwide, becoming the largest white-collar boxing match of all time.

The two YouTubers are scheduled to collide today in a rematch in the Los Angeles Staples Centre before a sell-out crowd of 21,000.