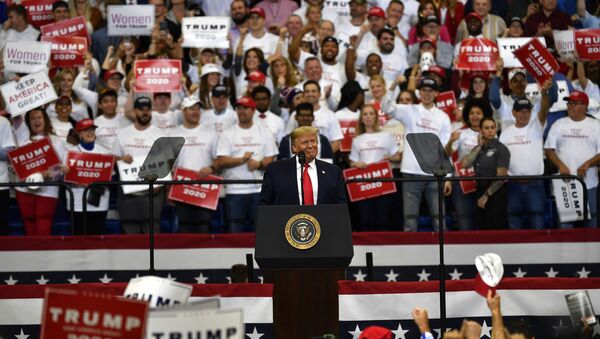 © AP Photo / Timothy D. Easley
Subscribe
Speaking at a Monday rally that gathered throngs of supporters amid the ongoing impeachment inquiry, Donald Trump addressed a whole number of issues including the successful hunt for al-Baghdadi as well as “crazy” Democrats obsessed with Russia-centred conspiracy theories.

At a Kentucky rally on Monday, President Trump addressed a number of crucial international issues, including the elimination of notorious Daesh chief Abu Bakr al-Baghdadi that hasn't left the headlines ever since it happened early last week.

The president recounted to the applauding audience how American special forces had just provided "the world's number-one terrorist a one-way ticket to hell", in a metaphoric reference to the now deceased Daesh leader Abu Bakr al-Baghdadi, killed in a suicide attack during a US raid in the Syrian province of Idlib.

He then lauded the efforts of the elite special forces dog, which he had previously touted on Twitter by posting a photoshopped image that featured the dog being awarded for its contribution to the mission:

"The dog will be coming very shortly to the White House!" Trump remarked standing in front of the crowd of attendees wearing "Read the transcript!" shirts in a suggestive allusion to Trump’s phone call with his Ukrainian counterpart, underlying Democrats’ impeachment proceedings dubbed by POTUS a fresh round of “witch hunt garbage".

Shout Out to Republicans

Separately, POTUS called on what he referred to as “an angry majority” of voters to send a powerful “signal” to Democrats and the world by handing the GOP a big victory not only in Tuesday’s gubernatorial vote there but likewise in the upcoming elections in the states of Virginia, Mississippi, and Louisiana.

Amid the clearly audible “USA” chants, POTUS went on to boost Gov. Matt Bevin by ascertaining Republicans’ overall accomplishments under his tenure, including energy independence and historic lows in unemployment rates.

Mueller's Testimony  - 'a Wonderful Day...for me'

Democrats and the impeachment proceedings they spearheaded were also a talking point.

"The Democrats are trying to tear our country apart", Trump said, noting that partisans had pushed the "Russia hoax" and the "Mueller scam. ... And then, Mr Mueller testified", Trump said, further saying:

“That was a wonderful day -- for me", he concluded referencing testimony from the former special counsel, who published a final report on his inquiry in April and testified in July, concluding that there was no evidence of collusion between US President Donald Trump and Russia during the 2016 presidential campaign.

Trump proceeded by calling the opposition party "crazy" and obsessed with Russian conspiracy theories, bringing up a recent spat between Hillary Clinton and presidential candidate Tulsi Gabbard, in which the former secretary of state implied fellow Democrat Gabbard was being "groomed" to be a "Russian asset".

New Round of 'Witch Hunt' in Full Swing

In September, House Democrats kickstarted impeachment proceedings against POTUS Trump in the wake of a complaint by a whistleblower, reportedly from the ranks of the CIA.

The whistleblower assumed Trump’s conversation with Volodymyr Zelensky could constitute an abuse of power since the tone was claimed to be pressuring, as the president asked his Ukrainian counterpart to join efforts with the US and Trump’s personal lawyer Rudy Giuliani to look into the Bidens and their possible criminal activities in Ukraine.

Both Trump and Zelensky, however, insisted the call was absolutely benign, with POTUS offering to read aloud what he argues is an unredacted transcript of the notorious phone call.