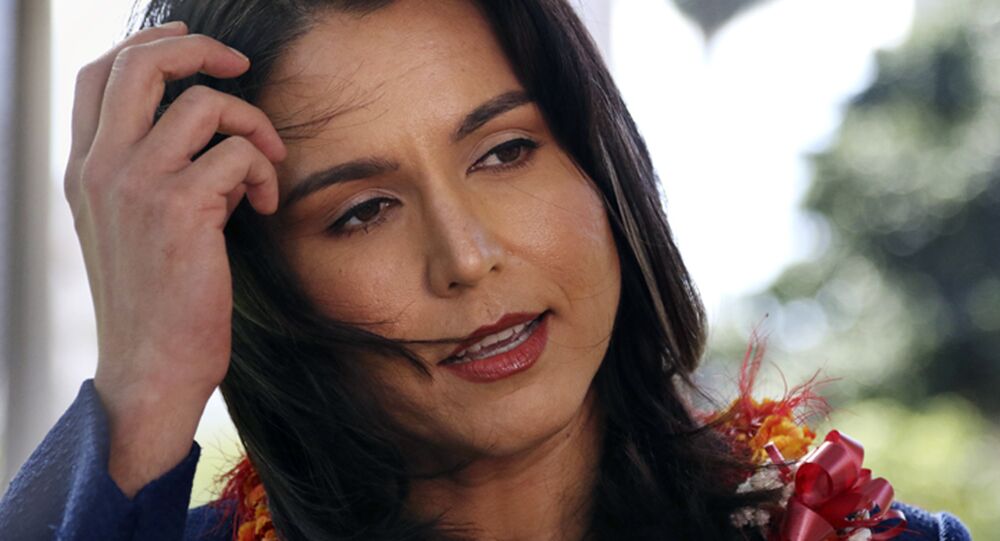 The bitter, though non-face-to-face, exchange was triggered by Hillary Clinton’s message that Hawaii congresswoman Tulsi Gabbard was being supported by the Russians as a third-party 2020 presidential candidate, which spawned backlash not only from Democrats but Republicans alike.

2020 presidential hopeful Tulsi Gabbard doubled down on her jabs at Hillary Clinton Tuesday night, posting another campaign video in which she calls the former first lady’s and ex-secretary of state’s foreign policy a “disaster".

“Hillary, your foreign policy was a disaster for our country and the world", Gabbard started off, before continuing her speech with a rundown of what she thinks Clinton’s policies have led to:

“It’s resulted in the deaths and injuries of so many of my brothers and sisters in uniform. It’s devastated entire countries, millions of lives lost, refugee crises, our enemy al-Qaeda/ISIS* strengthened".

Gabbard, formerly a Hawaii Army National Guard major who served in Iraq and currently a representative for the island state went on to demand Clinton apologise for the “damage” she claims Clinton's policies have inflicted and call to reconsider the Democrats’ foreign policies at large:

“It is long past time for you to step down from your throne so the Democratic Party can lead with a new foreign policy which will actually be in the interests of and benefit the American people and the world", she rounded off the rant.

Gabbard’s Tuesday night address, with the camera well focused on the congresswoman’s expressions and gestures, came as the latest jab aimed at Clinton since the former first lady implied that Russia was supporting Gabbard to become an "asset" for them in the 2020 election.

In a previously posted video, on Sunday, Gabbard assumed Clinton had had it out for her since 2016, when she left her position in the Democratic National Committee and endorsed Sen. Bernie Sanders’ candidacy for president.

Former first lady and Secretary of State Hillary Clinton reportedly implied Gabbard is a 'Russian-supported' presidential candidate, with the public bringing up her earlier statement that Gabbard is a “Russian asset”, just like another candidate Jill Stein. She even pulled out from an event where Gabbard was to take the floor, although it was not immediately clear if the Hawaii Representative was the reason for this. Gabbard, who has even secured support from Republicans, including POTUS Trump, struck back with a fiery tweet, mincing no words as she dubbed Clinton “the queen of warmongers, the embodiment of corruption, and personification of rot”.

In the meantime, Clinton’s remarks during a PBS News Hour interview have sparked rumours that the former first lady could enter the 2020 presidential race. She hit the news saying she could defeat Donald Trump "again" if she decided to enter the fray, while The New York Times cited sources as claiming Hillary had previously shared with them she would consider partaking in another race if she thought that she could win.