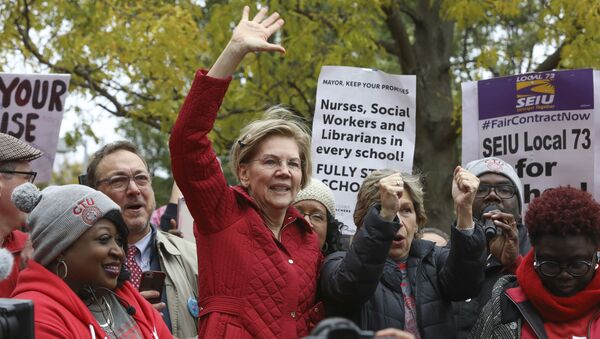 As the Chicago teachers’ strike gears up for its fifth day and more than 300,000 students remain out of school, negotiations between the Chicago Teachers Union (CTU) and Chicago Public Schools remain at a standstill.

The strikes are a fervent fight for student resources, Aislinn Pulley, an organizer with the Black Lives Matter movement who has been organizing community support for the strike, told Radio Sputnik’s Loud & Clear Tuesday.

“Right now we’re at a political crisis, and the Chicago Teachers Union (CTU) and the support staff through [labor union] SEIU Local 73 have remained steadfast in their conviction and commitment to the children of Chicago. Right now, we have 514 district-run schools and only 128 librarians in all of those schools. There is one counselor per 444 students, there is one social worker per 1,238 students and there is one school nurse for every 2,859 students. But you know what there is never a shortage of? Police officers,” Pulley told hosts Brian Becker and John Kiriakou.

“That’s actually a lie,” Pulley noted. “She just approved an increase in the school resources budget, which is the police officers budget for the schools, from $20 million to $33 million.”

Service Employees International Union (SEIU) Local 73 “represents more than 29,000 workers, primarily in public service and publicly funded positions in school districts, municipalities, social service agencies, and many other job classifications in Illinois and Indiana,” according to its website.

“What SEIU and CTU have done is really bridged the gap that has been intentionally put into place to bar the teachers from being able to strike over things aside from wages. There’s actually a clause that has been put into legislation, I think it was in the mid-’80s, that prevents them from striking for anything other than wages. So, with this partnership with SEIU, this expands that,” Pulley said.

“This is not about wages. This is about ensuring our schools have the resources that they need, and in order to do that they are viewing all of this through not just the critical race lens - which understands how capitalism disproportionately impacts black communities and brown communities - but also with the class analysis ... that this is impacting our working-class students the hardest, and that without intentional measures to put in place, these students are going to continue to be left out and discarded by the system,” she explained.

“Lori Lightfoot is a seasoned corporate lawyer. She made her career on defending multi-billion-dollar corporations and police officers. And whether or not she has any sympathy, who knows? But certainly Elizabeth Warren’s presence has political impact. It has momentum … I think what this will definitely do, if it doesn’t impact Lori Lightfoot, will mobilize and energize the masses of teachers and supporters and students who are actually seeing a politician - many of whom for the first time in their lives - actually speaking to the issues that are so resonant with the millions of working-class black and Latinx and white folks around the country, which is that we’ve had it with the billionaire class toppling our educational systems, and we are retaking control,” Pulley said.