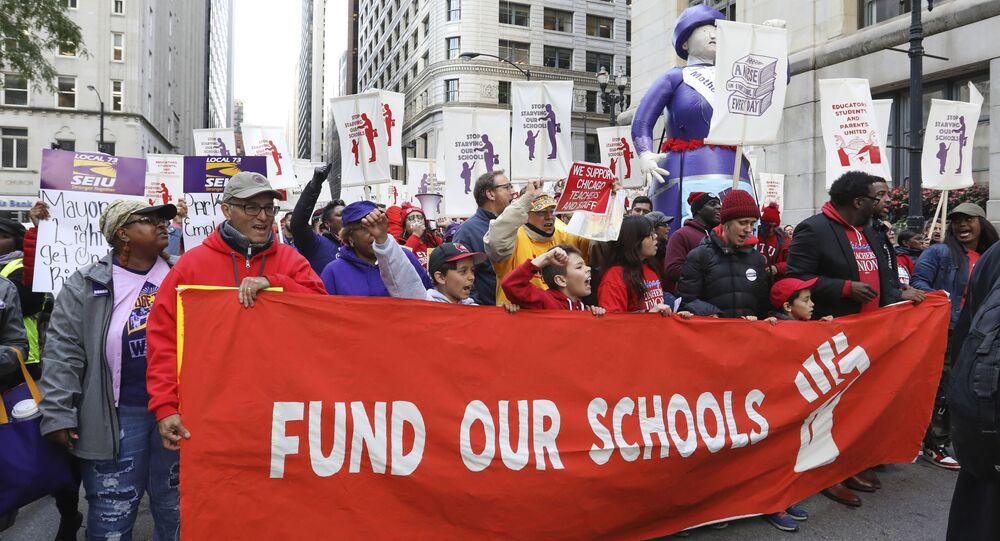 Thousands of teachers marched through Chicago Thursday following a rally outside of the Chicago Public Schools (CPS) headquarters, marking the first day of the Chicago Teachers Union (CTU) strike.

The issues teachers are marching over extend past teacher pay to how poor and working families in Chicago have been disproportionately affected by education divestment, CTU member and activist Nick Stender discussed on Radio Sputnik’s By Any Means Necessary Thursday.

“The issues are not just teacher pay, which is always an issue. Teachers, given the kind of work that we do, are some of the most underpaid members of society. We are very underpaid - pay is an issue of course. We are also talking mainly about staffing. Our schools are horrendously understaffed. In fact, almost all the schools in CPS do not have a nurse. A nurse comes to my school once a week just to basically poke her head in, say she was there and go to the next place. We don’t have a librarian in my school. We don’t have art teachers, we don’t have music teachers … We need more counselors in our schools as well, especially in the high-trauma neighborhoods like the school I work in,” Stender explained.

​“Statistics show that in a high-trauma neighborhood, you need to have one counselor for every 50 students, and I would even argue that maybe that’s a little high, given some of the severity of the issues that our students deal with,” he said. “In CPS schools, there is one counselor for every 720 students - a major issue, and it makes it functionally impossible for our classes to function, because our students aren’t really able to learn in that capacity."

“When we have overcrowded classrooms - some classes have one teacher for 40 students in kindergarten classes - you can see that the combination of both trauma, lack of attention to trauma and the class size issue is causing some really major holdups in the system. And so we are fighting to create the learning environment students need … that will actually allow learning to be done,” Stender added.

​Thursday’s strike, which involved about 25,000 CPS teachers, came after the CTU rejected a contract proposal put forth by the district Wednesday evening.

“The support has been overwhelming,” Stender noted.

“I’ve never seen this sort of community support for any action that [I’ve been at before]. On the picket lines earlier today, we had honking from almost every single car that came by, people coming up to us and expressing support for the teachers and support for our struggle, because the people in the community understand that teachers play a vital role in making sure that our society can continue being a society and not fall into anarchy. The issues may be different from 2012. We are still fighting to keep that clause about stopping charter school expansion, but the issues now are much more about staffing, about class sizes, which ironically is not something we can explicitly legally negotiate on,” Stender added.

​The last teacher strike in Chicago took place in 2012, when around 26,000 members of the CTU walked out of 580 schools to fight for improved pay, benefits and job security.

According to Stender, the school district has the money to support the teachers’ current demands. However, that money isn’t being directed where it should be.

“The money exists in the form of tax breaks for corporations, which they were going to give to Amazon to come to Chicago” and establish its headquarters there. “Thankfully, that did not happen,” he said.

“The money goes to developments in the [Chicago] Loop, developments on the North Shore, these parks they built, including parks around Millennium Park. Listen, I'm not saying that these beautification projects aren’t important. I’m just saying that this is by design that we are seeing the very, very meager breadcrumbs being doled out to the teachers, because it’s really easy for anybody on the street to look at this and say, ‘Oh, yeah, just fund the schools,’” Stender continued. “We can see why the schools aren’t being funded in this way, because it is working class families being affected, it’s people without power, people who are marginalized, and the lack of funding in those areas contributes to that marginalization.”

“All the teachers that I've spoken with have raised these exact same issues.”

“What is it that Karl Marx said in ‘The Communist Manifesto’? That everything that is sacred is made profane by capitalism … we’re seeing that in Chicago. Education used to be considered a sacred right for students,” Stender noted.

However, that being said, there’s been a “tremendous growth” in “union power” over the last few years, Stender noted.

“That’s extremely important to point out, and really the Chicago Teachers Union led the way in 2012, that first strike that really galvanized the teacher’s movement … us teachers are very conscious of that fact that this is not just a national issue but an international issue and that people are looking to Chicago to see what direction we are going to take,” Stender added.