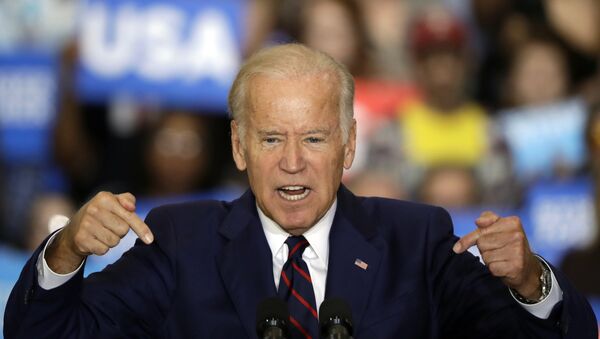 © AP Photo / Matt Rourke
Subscribe
In 2016, Vice President Joe Biden’s son Hunter was a board member of a Ukrainian energy company which was later suspected of illegal activity. The role the former vice president had in suspending the investigation into the company was brought up by Donald Trump in his July phone call with the Ukrainian president, leading to an impeachment inquiry.

Democratic presidential candidate and former Vice President Joe Biden exploded at a reporter during a campaign stop in Los Angeles on Friday, following a question about his son’s business activity in Ukraine back in 2016.

Hunter Biden’s service on the board of directors of Burisma Holdings group and the company’s alleged illegal activity that was investigated by Ukrainian Prosecutor General Viktor Shokin, who was later dismissed at the request of Joe Biden, has been an outstanding issue within Donald Trump’s impeachment inquiry that was initiated last week.

However, when asked about the conflict of interest following his deep involvement in Ukrainian politics at the time of his vice presidency and his son's business dealings in Ukraine, Biden not only refused to answer the question, but also snapped at the reporter.

"How was your role as Vice President in charge of policy in Ukraine and your son's job in Ukraine, how is that not a conflict of interest?"

Biden: "I'm not going to respond to that!"

What is he hiding? pic.twitter.com/jbycKLARhE

“Let’s focus on the problem, focus on this man, what he’s doing, that no president has ever done,” Biden said right afterwards, switching the focus to Trump’s impeachment inquiry proceedings following his 25 July phone conversation with Ukrainian President Volodymyr Zelensky, which featured a discussion of the interrupted investigation.

Biden’s comments came hours after Ukraine's newly-appointed prosecutor general announced that Ukraine will review allegations of criminal activity of the Burisma company and other related cases.

Hunter Biden joined the company’s board in 2014 around the same time his father Joe Biden was appointed to lead the Obama administration’s policy in Ukraine, raising questions about a possible conflict of interest. Joe Biden publicly demanded in 2016 that Ukraine’s Prosecutor General Shokin be dismissed following his probe into the company’s alleged illegal activity, threatening to withhold more than one billion dollars in US aid if the Ukrainian government did not remove Shokin from the post, which eventually happened.

Donald Trump suggested looking into the matter during the conversation with the Ukrainian president, which however was seen as a breach of national security by the Democrat-controlled House of Representatives, prompting them to initiate an impeachment inquiry into Trump. The US president condemned the inquiry, calling it a “witch hunt”.

000000
Popular comments
Yea I bet this corrupt slim ball who is one the key players that ushered in what can now only be called the epoch of greed and war would rather talk about the corruption of others rather than his own complicity in under handed and corrupt politics. For many years Biden has been taking large campaign contributions from the most notorious financial criminals on the planet namely the US banking industry, who by the way is responsible for the greatest transfer of wealth from the working classes to the oligarchs and corporate thieves who pick our pockets every day charging outrageous interest rates perpetuating the horrific debt burden most Americans are carrying around. $911 billion in just credit card debt. In any decent society Biden would be in jail not running for President.
hopscotch64
6 October 2019, 06:32 GMT8
000000
...gold toothed Daddy Sewer Rat then responded by looking even more guilty..!
Freedom_Gazz
6 October 2019, 07:05 GMT7
000000
Newsfeed
0
New firstOld first
loader
LIVE
Заголовок открываемого материала
Access to the chat has been blocked for violating the rules . You will be able to participate again through:∞. If you do not agree with the blocking, please use the feedback form
The discussion is closed. You can participate in the discussion within 24 hours after the publication of the article.
To participate in the discussion
log in or register
loader
Chats
Заголовок открываемого материала
Worldwide
InternationalEnglishEnglishMundoEspañolSpanish
Europe
DeutschlandDeutschGermanFranceFrançaisFrenchΕλλάδαΕλληνικάGreekItaliaItalianoItalianČeská republikaČeštinaCzechPolskaPolskiPolishСрбиjаСрпскиSerbianLatvijaLatviešuLatvianLietuvaLietuviųLithuanianMoldovaMoldoveneascăMoldavianБеларусьБеларускiBelarusian
Transcaucasia
ԱրմենիաՀայերենArmenianАҧсныАҧсышәалаAbkhazХуссар ИрыстонИронауОssetianსაქართველოქართულიGeorgianAzərbaycanАzərbaycancaAzerbaijani
Middle East
Sputnik عربيArabicArabicTürkiyeTürkçeTurkishSputnik ایرانPersianPersianSputnik افغانستانDariDari
Central Asia
ҚазақстанҚазақ тіліKazakhКыргызстанКыргызчаKyrgyzOʻzbekistonЎзбекчаUzbekТоҷикистонТоҷикӣTajik
East & Southeast Asia
Việt NamTiếng ViệtVietnamese日本日本語Japanese俄罗斯卫星通讯社中文（简体）Chinese (simplified)俄罗斯卫星通讯社中文（繁体）Chinese (traditional)
South America
BrasilPortuguêsPortuguese
NewsfeedBreaking
13:58 GMTAir Defence Strengthened in Northern Ukraine as Part of Exercises With NATO, Air Command Says
13:54 GMTSenior Dies From Self-Inflicted Wounds at Medics' Protest in Warsaw
13:53 GMTGuinean Military Says Ousted President Conde to Remain in Country
13:30 GMTElon Musk Says Future SpaceX Ships Will Have Food Warmers After Inspiration4 Mentions Cold Pizza
13:22 GMTEx-Sec of State Pompeo, NSA O'Brien Knew Nothing About Gen. Milley's Secret Talks With China: Report
13:13 GMTParisians Protest Against COVID-19 Health Pass, Mandatory Vaccinations
13:03 GMTLive Updates: Trump Supporters Gather for 'Justice for J6' Rally Near US Capitol
13:03 GMTK-Pop Sensation BTS Turns Celebrity Diplomats, Will Represent South Korea at the UN General Assembly
12:59 GMTPolice Scrap Request for 100 Armed National Guardsmen to Tackle Pro-Capitol Riot Rally
12:16 GMTFrench Ambassador Accuses Australia of Betrayal Before Leaving for Paris
12:10 GMT'Why Would US Ensure Our Defence?' France Urges EU to Boost 'Strategic Autonomy' Amid AUKUS Fallout
12:03 GMTDonald Trump Called North Korean Leader Kim Jong-un 'F**king Lunatic', New Book Claims
11:55 GMTVideo: Protesters in Greece Burn US, NATO Flags as Alliance Holds Annual Meeting
11:44 GMTTroy Deeney on Ronaldo's 'Magic Diet': 'If I Saw Him Eating Horsesh*t... I'd Eat That Too!'
11:39 GMTPentagon Warns Europe of Russia Posing Bigger Security Threat Than China
11:32 GMTPfizer Recalls Its Anti-Smoking Drug Chantix Over Cancer Concerns
11:25 GMTPLA Slams US as 'Destroyer of Peace' After American Warship Sails Through Taiwan Strait
11:03 GMTRevealed: How Washington, London, and Canberra 'Kept Paris in the Dark' About AUKUS Deal
10:36 GMTRussian Elections Face Three Cyberattacks From Abroad on the First Day of Vote
10:28 GMTMysterious Disappearance of Gabby Petito: Main Details of the Case