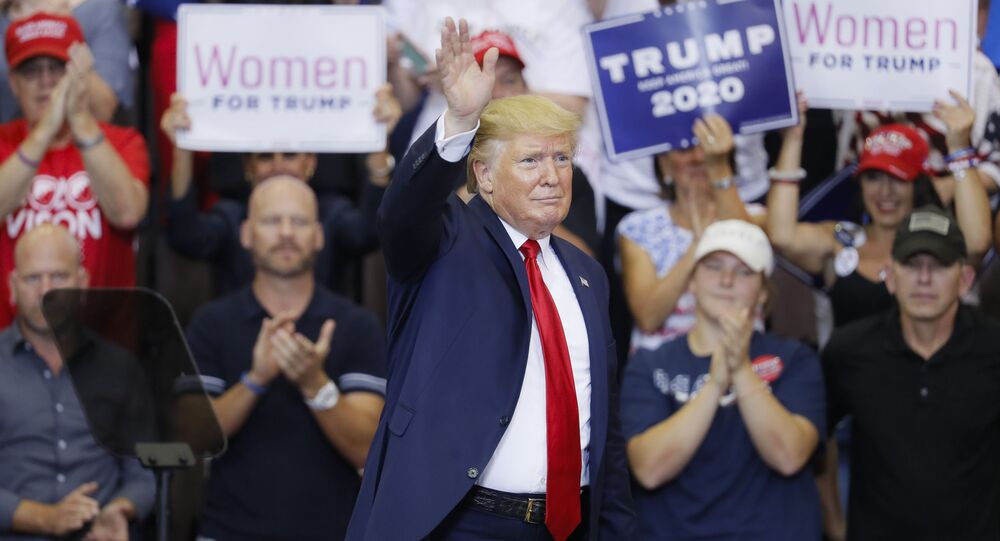 Pundit on Trump Impeachment: One of Greatest Miscalculations in History of Presidential Elections

Democrats have lashed out at US President Donald Trump, accusing him of breaking his oath of office by calling on China to investigate the former vice president and now Democratic presidential candidate Joe Biden.

House Speaker Nancy Pelosi said that Trump “confessed to his violation of his oath of office,” when he asked China and Ukraine to help look into the Biden family.

“China should start an investigation into the Bidens. Because what happened in China is just about as bad as what happened with Ukraine,” Trump told reporters outside the White House on Thursday.

While House Intelligence Committee Chairman Adam Schiff, who has been caught making up quotes of what Trump said to the leader of Ukraine in the July phone call that’s now at the centre of the impeachment inquiry against the President, also took the opportunity to attack Trump. Schiff called the President’s statement “a fundamental breach of the president’s oath of office.”

The Democrats Changing Tune 21 Years On

On September 24, when Mrs Pelosi officially launched a formal impeachment inquiry after an alleged whistleblower complaint into President Trump suggested he pressured the Ukrainian leader to investigate former vice president Joe Biden and his family, she seemed determined.

But Pelosi hasn’t always been so keen on impeachment. In a video from 1998, when it was Democratic President Bill Clinton who was facing impeachment, she accused the Republicans of being “paralyzed with hatred” and “not judging the president with fairness, but impeaching him with a vengeance.”

“Paralyzed with Hatred” of President Trump is exactly how I would describe House Democrats today.

It would be a shame if this went VIRAL and @SpeakerPelosi saw it!

After Clinton lied under oath about his affair with White House intern Monica Lewinsky, it didn’t bother the Democrats. But now it’s a different story.

“They just hate Donald Trump and it is the greatest, most organized vote suppression effort in the history of the United States because they are trying to overturn a presidential election,” says Michael Shannon, a political commentator and Newsmax and Cagle Syndicate columnist, as well as the author of the book “A Conservative Christian's Guidebook for Living in Secular Times”.

Trump tweeted a 1998 video of Biden, Pelosi and other Democrats warning not to use impeachment to overturn an election and the will of the voters.

Scott Bennett, a political analyst and former US Army officer, believes the Democrats have made a mistake by launching impeachment proceedings against the US leader:

“The Democrats, including Nancy Pelosi, the House Speaker, and others have made a major error in judgment and miscalculated the effect of this impeachment inquiry on the American public,” Bennett said.

He added that this will only play in Trump’s favour.

“Instead of turning against Donald Trump, the majority of the American public will turn against the Democrats and see them as once against creating a fabulous fraud and lie,” Bennett argued.

Trump is the fourth President of the United States facing impeachment. And ever since the Democrats brought it on, he has lashed out against their impeachment efforts, calling them a “hoax”, a “witch hunt” and even said it could lead to a “civil war”, as his war of words escalated.

“Trump is disorganized, vindictive. He doesn't have much of a filter - so he is not going to take this well,” Shannon pointed out. “But he managed to survive the Mueller witch hunt. And this is not going to last long,” the political commentator said, referring to the Trump-Russia election collusion probe that cleared President Trump of conspiring with Russia.

Just like Trump, then-President Richard Nixon was also highly critical of the 1973-1974 impeachment process, but with his conviction and removal from office looming he resigned.

Bill Clinton, on the other hand, back in 1998-1999 did the exact opposite, trying to mention the impeachment inquiry as little as possible.

In the end, Clinton’s “strategy” paid off despite the fact that he lied under oath. In February 1999, the Senate acquitted Clinton in a presidential impeachment trial and he stayed in office.

The impeachment inquiry centres around Trump pressuring the Ukrainian President Volodymyr Zelensky to investigate Biden and his role in shutting down an investigation by Ukraine's chief prosecutor into Burisma Holdings gas company that his son Hunter Biden was a paid board member of and Biden getting the prosecutor fired.

Bennett believes that this story will also expose the corruption and crimes that Joe Biden was involved with in Ukraine.

“Specifically, when Joe Biden was the Vice President of the United States, he made a demand to the government of Ukraine to terminate a prosecutor who was investigating an energy firm that Joe Biden’s son, Hunter Biden, was paid $50,000 a month to be on the board of - despite Hunter Biden not having any experience in the energy sector. This money came from the CIA,” the political analyst and former US Army officer said.

A video of Joe Biden actually talking about him threatening to uphold $1 billion in US loans to Ukraine if the prosecutor was not fired has now resurfaced:

MUST WATCH: Here's Joe Biden in 2018 bragging about using his power to hold up $1 BILLION in U.S. loans unless Ukraine fired the prosecutor investigating Burisma – a corrupt Ukrainian oil company paying his son $50,000 a month.

Biden needs to explain his conflict of interest! pic.twitter.com/bDhaKjFNZN

“This was a criminal act of government corruption, and the Democrats are realizing that not only will this lead to the destruction of Joe Biden as the Democrat nominee for President, but it will destroy the Democrat Party in the eyes of the American people and indeed the world,” Bennett noted.

The analyst also pointed out that this will destroy Biden’s election hopes: “Most likely, the full exposure of this story will result in the destruction of Joe Biden’s campaign to replace Donald Trump as President in 2020, as well as the implosion of the Democrat party and a Republican takeover of the House of Representatives and the Senate.”

Or Consequences for Trump

As the story evolves, the whole impeachment saga will most likely increase the clarity and transparency about the extent of corruption in government, according to Bennett, and only help Trump’s image.

“[...] As the distortions and corruption of the Democrat party and the American media become apparent, Donald Trump will be positively viewed by the American people as a “hero battling political corruption” and honouring his original promise to “drain the swamp”. Instead of negatively affecting President Trump, the story will actually greatly enhance Donald Trump’s image by defining him as a champion of the people, fighting the elite corruption of the political establishment, and their financial backers like George Soros,” the political analyst said.

Bennett described the Democrats as being “completely dominated and consumed by their own feverish hysteria.” But with American people supporting Trump in higher numbers than ever before, “this will prove to be one of the greatest miscalculations and political upsets in the history of Presidential elections,” the analyst stressed.

Michael Shannon echoed a similar stance: “The Democrats are just flailing around,” the political commentator said.

“They thought they had another smoking gun that was going to destroy Donald Trump. And then they found out what they have is basically a game of telephone that went wrong.”

But will this impeachment inquiry pass the House of Representatives? Shannon believes that if it isn’t soon postponed, then “it would pass.” But at the same time, the expert is certain that “it'll be killed in the Senate.”

“They need 67 votes to pass in the Senate - and there's just - I don't see any foreseeable way it would pass. And actually, if it's not passed he would be convicted in a Senate trial and I just don't see that happening,” he explained.