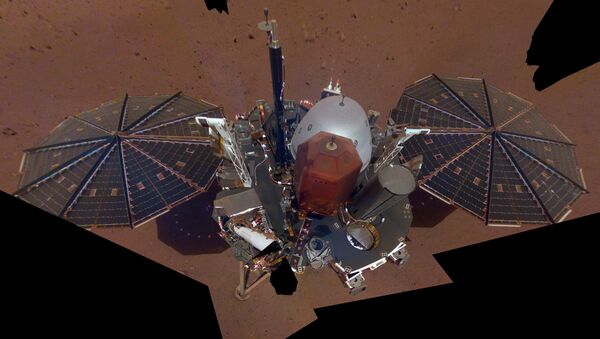 © NASA . NASA/JPL-Caltech
Subscribe
International
India
Africa
Svetlana Ekimenko
All materialsWrite to the author
NASA's InSight lander touched down on Mars last November. Its sensitive seismometer, designed to listen for marsquakes, can pick up vibrations as subtle as a breeze, and recorded its first seismic rumbling in April.

Stunning audio samples were released on Tuesday covering more than 100 events detected on Mars by NASA's InSight lander, according to the MARS InSight Mission.

While some are likely to be marsquakes, Martian wind and mechanical movements by the seismometer's arm, there was a symphony of mysterious noises described by the NASA team as "dinks and donks", complemented by an eerie whistling.

There are several possible explanations for them, such as parts of the seismometer expanding and contracting, while a ticking sound could be due to heat loss, like when a car engine is turned off and begins to cool.

"It has been exciting, especially in the beginning, hearing the first vibrations from the lander. You're imagining what's really happening on Mars as InSight sits on the open landscape."

NASA's InSight lander arrived on the red planet last November and placed a seismometer on the Martian surface.

The highly sensitive seismometer, called the Seismic Experiment for Interior Structure (SEIS), can pick up the most subtle of vibrations, and was provided by the French space agency (CNES), and its partners.

Designed to listen for marsquakes, scientists hope to use the seismometer to study how seismic waves of these quakes move through the planet's interior, offering a glimpse into the inner structure of Mars for the first time.

It is also hoped that, by studying the marsquakes, scientists can learn more about how rocky planets like the Earth were formed.