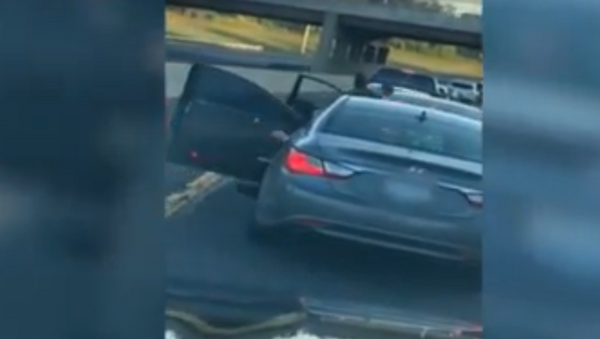 According to reports, the incident took place around 7 a.m. local time on Thursday near the major street of Halsted.

The now-viral footage, which was taken by a fellow commuter uninvolved in the brawl, shows the driver of a black car cutting off a silver Hyundai Sonata while swinging a baseball bat out of her car window. The driver in the black car eventually gets out of their vehicle and proceeds to smash the hood of the Sonata with the bat.

Two women then exit the Sonata. One of the women from the silver Hyundai and the woman from the black car begin punching each other and pulling each other’s hair. The third woman watches from a short distance and intervenes intermittently; she appears to be trying to protect the passenger that was in the Sonata with her.

According to NBC Washington, by the time state troopers arrived at the scene, none of the three women were present.

In a statement obtained by NBC News, the Illinois State Police said it “takes all cases of physical violence on our expressways seriously.” Police are asking any witnesses or people with information about the incident to call 847-294-4400.

According to a recent study by the AAA Foundation for Traffic Safety, almost 80% of drivers expressed “significant anger, aggression or road rage behind the wheel at least once in the previous year.”

Previous research by the foundation found that more than 50% of fatal crashes “involved at least one driver who performed a potentially aggressive action.”