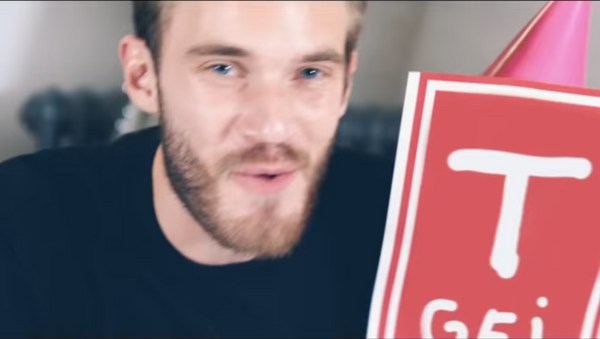 Although the Area 51 break-in was eventually shown to hardly be achievable following warnings from security services, the buzz shows no signs of dying away, with YouYouber PewDiePie referring to the failed event as “an absolute win”. On top of this, he apparently knows how to give the hype additional steam.

Top YouTuber Felix Kjellberg, aka PewDiePie or Pewds for short, having been inspired by the massive Area 51 online flashmob craze, has proposed what he sees as a viable location for the next sweeping event - and however surprising it may seem, the area is Vatican City.

When the adventure to storm Area 51 didn’t quite go as planned, with just a handful people present rushing to take pictures with the guards instead of storming the Nevada military base, which is assumed by many conspiracy theorists to shelter extra-terrestrials, the Swedish vlogger managed to cash in on this fact. He speculated in one of his latest “Meme Reviews” that the failure is, quite the opposite, an “absolute win”, given the mass of laughable memes and jokes flooding the Internet, putting a smile on thousands of faces.

To keep the media sensation alive, Pewds went on to follow up on his video on Twitter, asking his 18.8 million followers when they would set out on a journey to the Vatican, spawning a wealth of responses, with many sharing their own wild ideas.

While one fan gave a thumbs-up to the Vatican option, arguing that one “needs to discover if popes are real”, others floated other venues – from beaches to the fictional world of Pandora and the NASA office, where they apparently hope to uncover outer space mysteries.

When is the NASA raid happening??
There is so many possibilities you can even imagine

When are we going to raid beaches? Also, please protect the environment.🌏

Some opted to drop a couple of arguments against the Vatican, though:

…while another even came up with an admonition:

This could actually be interpreted as a declaration of war

Some chose to defend Pewds’ choice, arguing that “they can’t molest all of us” and calling to “storm Vatican’s secret archives”:

Even at this point, there are already quite a few volunteers:

The recent Facebook movement that cheekily assembled crowds to break into the top-secret and well-guarded Area 51, failed to become a reality last week, but gave rise to a whole series of hilarious memes that have been widely shared on social networks.

The event, which was planned for 20 September, enjoyed overwhelming Internet virality after two million would-be alien hunters, many of whom are traditionally drawn to the place, vowed to partake, despite multiple warnings from the US military. It was eventually called off a couple of days before the kick-off over safety concerns, with the organisers okaying a music festival in the desert instead.