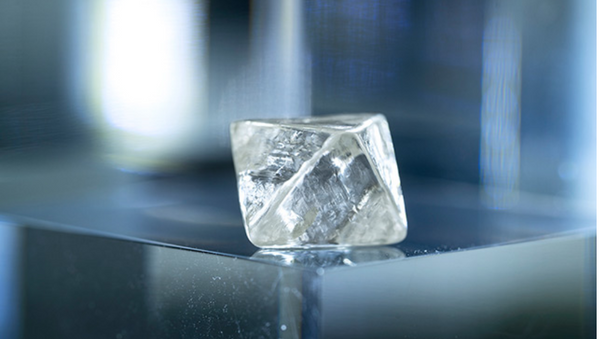 The mineral is believed to have been formed under immense pressure deep in the Earth’s mantle thanks to underground volcanic eruptions, scientists say.

A never-before-seen mineral has been discovered embedded in a diamond that was mined from a volcanic site in South Africa, Live Science reported Monday.

The mineral, which scientists have dubbed “goldschmidtite,” after the acclaimed geochemist Victor Moritz Goldschmidt, is believed to have been formed some 170 kilometers underground, at the depth of the Earth’s mantle, between the crust and the outer core.

"Goldschmidtite has high concentrations of niobium, potassium and the rare-earth elements lanthanum and cerium, whereas the rest of the mantle is dominated by other elements, such as magnesium and iron," said Nicole Meyer, a doctoral student at the University of Alberta in Canada, and a study co-author.

​According to Meyer, potassium and niobium make up most of the mineral, meaning the relatively rare elements were somehow moved together and concentrated to form the substance, although there were plenty of other elements around.

"Goldschmidtite is highly unusual for an inclusion captured by diamond and gives us a snapshot of fluid processes that affect the deep roots of continents during diamond formation," said mantle geochemist Graham Pearson, Meyer's co-supervisor.

The mineral sample was transported to the Royal Ontario Museum in Toronto, Meyer said.

The Koffiefontein mine, in which the mineral was discovered, is located in the Free State province of South Africa, about 80 km from Kimberley, which gave its name to minerals kimberlite and kimberlite pipes, volcanic protrusions in which diamonds are often found.