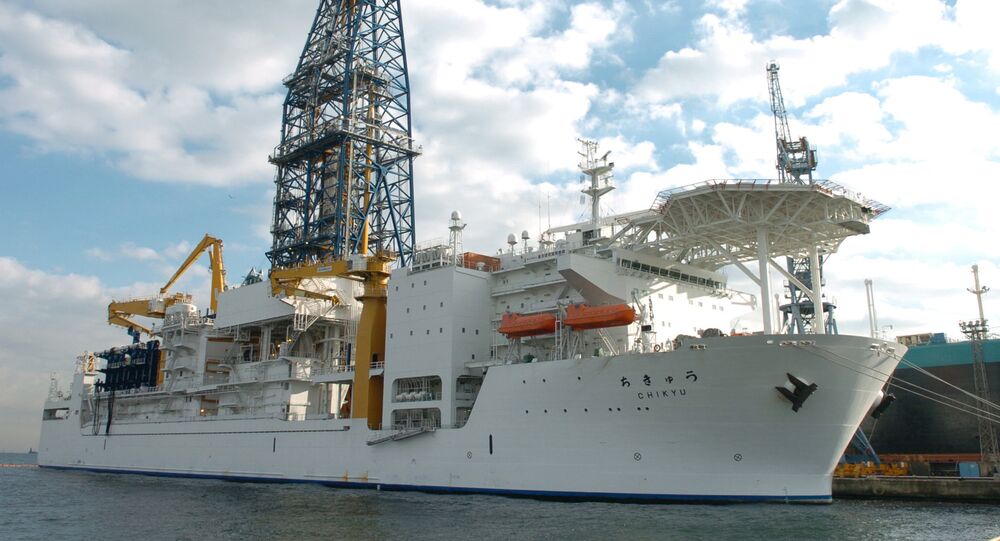 A group of Japanese scientists is planning to drill through the Earth's crust to reach the mantle for the first time in history. The preliminary study is expected to start in September. Radio Sputnik discussed the importance of the issue with Dr Natsue Abe, researcher with the Japan Agency for Marine-Earth Science and Technology.

© AFP 2021 / NOAA
Rare Earth Tremors Alert Japanese Scientists to 'Weather Bomb' in Greenland
A group of Japanese scientists, researchers from Japan's Agency for Marine-Earth Science and Technology (JAMSTEC), want to be the first to successfully drill into the Earth's mantle.

The Japanese government, which is helping to fund the expedition, hopes the research could help discover ways to better predict earthquakes.
Moreover, the project is aimed at exploring the oceanic crust and examining how deep microbial life exists inside the planet.

Under the plan, a drill will be dropped four kilometers into the ocean, before drilling through six kilometers of the planet’s crust to reach its destination.

The research group has chosen waters off Hawaii, Mexico and Costa Rica as candidate sites for drilling. It is expected that drilling will start by 2030.

Radio Sputnik discussed the issue with Dr Natsue Abe, researcher with the Japan Agency for Marine-Earth Science and Technology.

"Geologists had been long studying the surface of the Earth trying to understand how the Earth was formed and how it will evolve in the future. However they still don't know the exact composition of the mantle or its exact temperature. They need this data to be able to make precise assumptions about the Earth itself," she told Sputnik.

So far, she said, scientists only know that the Earth's mantle is not a liquid substance like hot lava, for example, but is solid rock.

While this is the first ever attempt to reach the Earth's mantle, she added, there was a previous project called the "Moho", an ambitious attempt to drill through the Earth's crust into the so-called Mohorovičić discontinuity, the boundary between the crust and the mantle, which started back in the early 1960s.

#Jamstec plan to drill 6km into earth's crust in attempt to become first to reach the mantle, source Jamstec pic.twitter.com/0SBv5y12Tt

​The project was initially led by the American Miscellaneous Society with funding from the National Science Foundation and was supposed to use the US drilling site but at that time they did not have the technology to drill into the mantle. Hence they gave up drilling.

Meanwhile, Dr Abe further explained, scientists have been trying to drill deeper and deeper into the surface of an ocean floor, but so far they have only got as far as 1,500 meters below the sea floor.

Dr Abe also talked about the choice of the three particular sites for future drilling — Hawaii, Mexico and Costa Rica.

"There are some criteria for choosing a site: there should be a typical or normal oceanic plate. Then the scientists should know where the mantle is, they should be able to locate the Mohorovičić discontinuity, the boundary between the crust and the mantle. And then there are some technological constrains," she said.

© CC0 / Pixabay
New Depths: Mediterranean Sea Floor Could Be Much Older Than We Thought
The researcher said the team will use the most advanced and the biggest drilling vessels currently available, the Chikyu.

The Chikyu's drill will drop down through almost 4.5 kilometers of water before reaching the ocean floor.

It will then bore through 6 kilometers of the sea floor, or the planet's crust, before it reaches the mantle.

To be able to use the drilling strings or the drilling pipe, which is 12 kilometers in length, they need very low temperatures. Hence these three particular sites have been chosen.

Drilling is supposed to start by 2030 at the latest. However this September the team is scheduled to start a site survey, which is a preliminary study of exactly where the drilling will take place in the future.