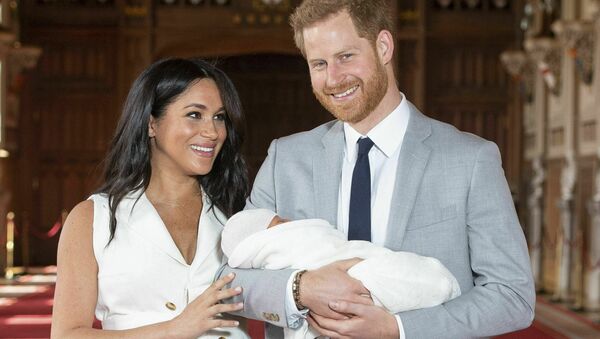 © AP Photo / Dominic Lipinski
Subscribe
As the Royal power couple Harry and Meghan set off on their tour of Southern Africa on Monday, some royal authors are questioning whether this trip will be used to revive their popularity amid a growing distaste among some of the public.

A royal biographer has claimed that Meghan Markle and Prince Harry’s “fractured public image” is down to their distinct and contrasting outlooks on life, according to the Times on Saturday.

Royal Author and journalist Penny Junor has said that the “fundamental truth” about the couple is that they are different people.

Ms Juror also revealed that while the couple might look “fantastic on paper,” things have “gone wrong for them” this year. She added that while people used to love them, now "people are just disappointed.”

According to Juror, the popularity of the couple started to dwindle around the time of Archie’s birth. Especially as people were infuriated with Markle for withholding information around Archie’s birth and criticised her for not “playing the game.”

The interview comes amid the couple's preparation for a 10-day Royal Tour to southern Africa with Archie. Fellow royal author Ingrid Stewart says that she believes they may take advantage of the trip as a means to reinvigorate some of their lost popularity.

This includes putting five-month-old Archie in the spotlight to appease those who criticised the couple for keeping the royal baby quiet. Archie has not officially been seen in public since May.

Ingrid said: “People will want to see baby Archie who could be the key player in this. I think if they show as a glimpse of Archie it could turn things around for the Sussexes. It’s a small thing but it could end up being a very big thing in terms of better press coverage. They’ve had a tough run, this is a chance to make it better.”

The couple's Royal Tour will begin on Monday, which they kicked off in a historic moment by taking to Instagram to allow fans to answer Royal Family history questions for them online.

On Thursday 26th September the Duke will be meeting some of the children and young people supported by Sentebale in Chobe district #Botswana during his #RoyalTour. Stay tuned! pic.twitter.com/e4D1YzNe5b

000000
Popular comments
The gold mine versus the gold miner...
russ
23 September 2019, 04:32 GMT
000000
Most in the UK, hope the African trip is such a success, the duo will not bother coming back.
anne00marie
23 September 2019, 06:46 GMT1
000000
Newsfeed
0
New firstOld first
loader
LIVE
Заголовок открываемого материала
Access to the chat has been blocked for violating the rules . You will be able to participate again through:∞. If you do not agree with the blocking, please use the feedback form
The discussion is closed. You can participate in the discussion within 24 hours after the publication of the article.
To participate in the discussion
log in or register
loader
Chats
Заголовок открываемого материала
Worldwide
InternationalEnglishEnglishMundoEspañolSpanish
Europe
DeutschlandDeutschGermanFranceFrançaisFrenchΕλλάδαΕλληνικάGreekItaliaItalianoItalianČeská republikaČeštinaCzechPolskaPolskiPolishСрбиjаСрпскиSerbianLatvijaLatviešuLatvianLietuvaLietuviųLithuanianMoldovaMoldoveneascăMoldavianБеларусьБеларускiBelarusian
Transcaucasia
ԱրմենիաՀայերենArmenianАҧсныАҧсышәалаAbkhazХуссар ИрыстонИронауОssetianსაქართველოქართულიGeorgianAzərbaycanАzərbaycancaAzerbaijani
Middle East
Sputnik عربيArabicArabicTürkiyeTürkçeTurkishSputnik ایرانPersianPersianSputnik افغانستانDariDari
Central Asia
ҚазақстанҚазақ тіліKazakhКыргызстанКыргызчаKyrgyzOʻzbekistonЎзбекчаUzbekТоҷикистонТоҷикӣTajik
East & Southeast Asia
Việt NamTiếng ViệtVietnamese日本日本語Japanese中国中文Chinese
South America
BrasilPortuguêsPortuguese
NewsfeedBreaking
08:37 GMTStowaway From Guatemala Hiding in American Airlines Plane's Landing Gear Found Unharmed - Video
08:20 GMTUK May Announce NHS Reshuffle to Tackle Omicron Variant, Sajid Javid Says
08:17 GMTUNRWA Funds Are Depleting and Palestinian Refugees Already Feel the Burden
08:05 GMT'Ronaldo's Only Ambition is to Retire With More Ballon d'Or Trophies Than Messi', Claims Award Chief
07:24 GMTDanger Zone: Tom Cruise Hangs From Wing of Flipping Plane for New Mission: Impossible Movie - Photos
06:56 GMTItalian Police Raid Juventus Offices as Part of Probe Into Player Transfers
06:37 GMTBJP MP Gautam Gambhir Receives Third Death Threat After Similar Messages From 'Daesh Kashmir'
06:06 GMTQueen Elizabeth II Picks Up Her 'MI6 Anti-Hacker Encrypted' Phone 'for Two People Only'
06:01 GMTFukushima Plant's Operator Starts Surveys to Prepare for Wastewater Dump, Reports Say
05:52 GMT'All Mouth and No Trousers': Boris Johnson 'Fed Up' With Priti Patel Over Migrant Channel Crossings
05:35 GMTFood Prices in Israel Much Higher Than in EU, Here's Why
04:46 GMTCOVID-19 Live Updates: Israel Closes Borders for Two Weeks Over Omicron Strain Fears
03:42 GMTHis Life, His Rules: Biden Spotted With Mask Down on His Chin While Inside Shop
03:28 GMTSouth Africa Laments Travel Restrictions, Calling Them ‘Punishment’ For ‘Excellent Science’
02:57 GMTGhislaine Maxwell Ready to Take Stand at Trial to 'Save Her Own Life' - Report
01:58 GMTMike Tyson Reveals Marijuana Makes Him 'Different Person' as He Launches New Cannabis Line
01:52 GMTConcerns About Spread of New Covid Strain Rise as Another Migrant Caravan Crosses Into US - Report
01:28 GMTMass Theft Occurs at Best Buy Store in Minnesota, Police Say
00:26 GMTTrump Keeps Mt. Rushmore Sculpture With His Face on It on Display in His Office
00:01 GMTA Glimpse of Hope: Biden Approval Rating Climbs 2 Points, But Still Scores Low on Economy - Poll