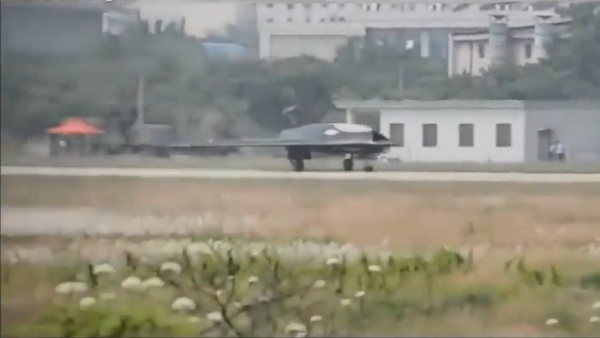 China’s new carrier-based drone, dubbed the Sharp Sword, will appear in the October 1 National Day parade in Beijing and is expected to enter service before the end of the year.

Unnamed sources in the Chinese People’s Liberation Army Navy told the South China Morning Post recently that final preparations were being made for the Sharp Sword drone to be commissioned before the end of the year.

“The use of drones for aircraft carriers and warships is the trend [for navies] around the world,” a source from the PLAN said. “China is no exception.”

The Sharp Sword is one of two drones to grow out of Shenyang Aircraft Design Institute’s AVIC 601-S stealth UAV testbed. Built in conjunction with the Aviation Industry Corporation of China (AVIC) and Shenyang Aerospace University, the program produced a slew of drone designs, one of which was the Sharp Sword. The other, the Dark Sword, was touted as the world’s first sixth generation aircraft at its unveiling last year, Sputnik reported.

​“China has learned the technology from the US and France,” the PLAN insider told SCMP. The US is developing a similar drone, the Boeing MQ-25 Stingray, and France has the experimental Dassault nEUROn carrier-based UAV. The Stingray is expected to serve a variety of functions for the US Navy, from communications relay to aerial refueling.

“The Sharp Sword does not have this capability,” the naval insider said of refueling, “so it will focus on reconnaissance missions for [China’s] missile systems.”

“In order to reduce its weight, the reconnaissance version of the Sharp Sword would not carry weapons despite having two internal bomb bays, because it needs to fit the ski-jump take-off ramp on the Type 001A,” the source told SCMP. “The Sharp Sword reconnaissance drone’s key mission will be gathering intelligence for ship-borne missile systems, enabling the missiles to accurately hit targets that are 300 km to 400 km away.”

The PLA Rocket Force has placed particular emphasis on developing dangerous long-range anti-ship missiles that can keep the US Navy at a safe distance, so the Sharp Sword’s ability to further extend that range only places enemy ships in all the more peril.

​The drone made an unexpected appearance in recent photos of the PLA’s parade rehearsals in Beijing. In just two weeks, the People’s Republic of China will celebrate the 70th anniversary of its foundation, when Communist Party Chairman Mao Zedong declared victory in the civil war and the foundation of the new socialist country in 1949.

The celebrations are expected to be marvelous, but also militant, with a military parade showing off the country’s incredible technical advancements as indicative of its status as a rising global power. Chinese President Xi Jinping has set a goal for China of achieving a “moderately prosperous society” by 2020 and making China a “fully developed nation” and “a global leader in terms of comprehensive national power and international influence” by 2049, the PRC’s centenary.

​China’s advancements in drone development reflect its heavy investment in emerging technological fields. Aside from dominating the worldwide market for drones both civilian and military, Beijing has developed a bevy of UAVs for military purposes, many of which rely on stealth technology, including the Sharp Sword.