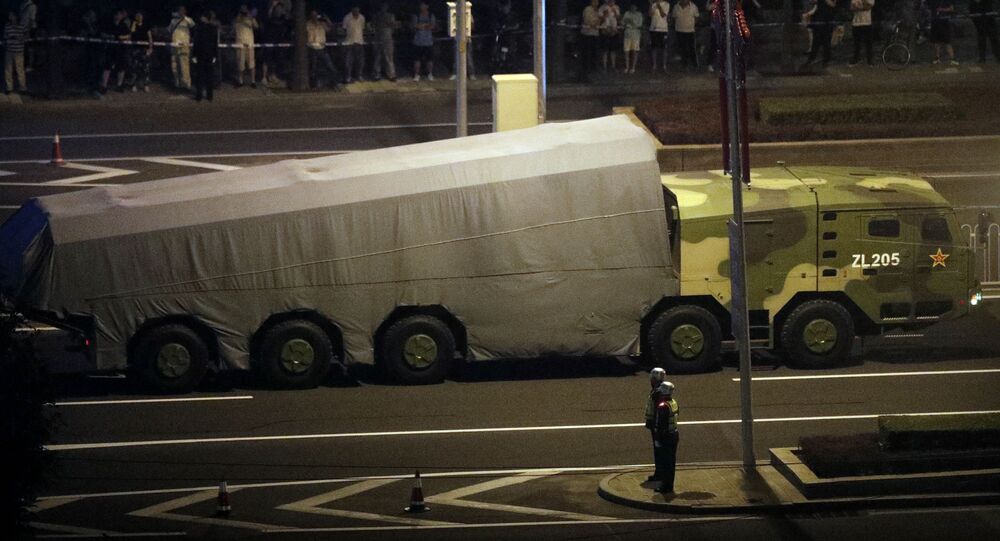 China has big plans to mark the 70th anniversary of the country’s founding on October 1, including a massive military parade celebrating the country’s defence capabilities. Officials had earlier promised that this year’s parade would feature some of its most “advanced weapons.”

Enthusiasts spotted a host of mystery military equipment at a dress rehearsal ahead of next month’s public celebrations dedicated to the October 1, 1949 founding of the People’s Republic of China.

The streets of central Beijing were cleared of traffic over the weekend, with columns of vehicles, many of them covered or somehow camouflaged, snapped while making their way to the parade route.

While some of the arms, including tanks, armoured infantry carriers, engineering vehicles, and multiple aircraft and helicopters, were identified, others, particularly a series of mysterious shapes on a seemingly endless series of large flatbed trucks, resulted in debates about just what those tarps were covering up.

The biggest interest seems to have gravitated toward a large, sleek glider-shaped vehicle, with some presuming that it was China’s new hypersonic UAV. Whatever it was, users pointed out that it seemed to be “built for speed.”

Some interesting technics from the rehearsal of the parade in Beijing..
New supersonic\hypersonic UAV ?
DF-17 with hypersonic glide vehicle ?
Launcher for ASM\LACM
Launcher for UAV-kamikaze? pic.twitter.com/PN4c9bEBVa

China’s anniversary parade rehearsal looks to have some interesting new weaponry to showcase. IDK what this is under the camouflage, but it’s looking built for speed. Ship killer, maybe? pic.twitter.com/YbvfhNHG7c

Other systems, including an odd, dolphin-shaped vehicle, generated similar interest, with users speculating that the unusual vehicle may be “another model flying wing UAV.”

#OSINTSunday Updated article on mystery #China underwater vehicle to be displayed on 1st October parade in Beijing. Thanks to @dafengcao for the hint toward it being unmanned. https://t.co/kalnVaDnWw #Navy #PRC #SCS #Submarines #OSINT pic.twitter.com/nkeUs5HNdb

And a few tanks for good measure pic.twitter.com/fiL7ji3JG0

Users also photographed the rehearsal for the aerial portion of the parade, spotting the Z-8, a giant army transport helicopter, two AWACS aircraft, a J-10C fighter, and more as they flew across the Beijing skyline.

The aerial rehearsal over Beijing for the 70th anniversary military parade of the People’s Republic of China on October 1 is in full swing this morning—Z-8 army transport helicopter, H-6K bomber, KJ-200 AWACS, KJ-2000 AWACS with J-10C fighter. More planes than in 2015 and 2013. pic.twitter.com/LFe63pK3aV

Live: 1st fly-past rehearsal for China’s 70th anniversary parade in Beijing. Another rehearsal with all columns available will come next week. pic.twitter.com/lKlHEuK8fq

Apart from the weapons, users were also puzzled by some of the parade floats being rolled out for the pageantry portion of the parade, with dozens of high-tech-looking floats rumbling through the streets in the dead of night.

An interesting-looking vehicle heading out of a highly secured area around the Workers Stadium in #Beijing. Tonight is a rehearsal for the huge military parade planned for October 1st #China pic.twitter.com/h23W0BU0jY

© AFP 2021 / GREG BAKER
A float drives out from the Worker's Stadium for an overnight rehearsal of a military parade in Beijing on September 14, 2019

Late last month, Chinese officials announced that the October 1 parade and pageantry event in the country’s capital would be a “grand celebration,” and promised that the military parade would feature “advanced weapons,” and be larger “than the ones commemorating the 50th and 60th founding anniversary” parades, “as well as the Victory Day military parade in 2015.” For comparison, the V-Day Parade, dedicated to the end of the Second World War, featured some 12,000 Chinese troops, 500 military vehicles and over 200 aircraft.

All branches of the Chinese military, including the People’s Liberation Army, Navy, Air Force, Rocket Force and Strategic Support Force will participate in the October 1 parade.

While authorities have emphasised that its military parade would not be aimed as a signal to any other country, they did note that it would show off China’s achievements in building up the country’s national defence potential over the past 70 years.