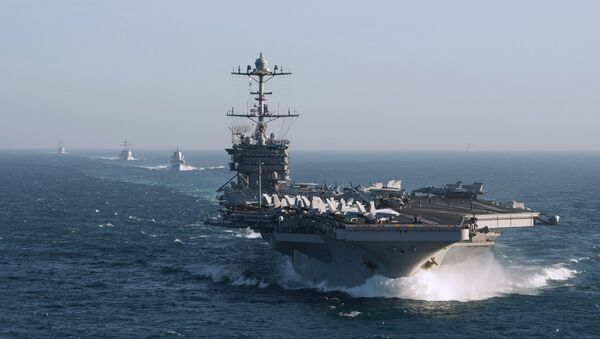 The US Navy was forced to deploy the USS Harry S. Truman’s surface escorts without the aircraft carrier on Thursday, as the vessel continues to undergo necessary repairs brought on following an electrical malfunction late last month.

Their destination was not reported, and a return schedule was not provided.

Back in August, the Navy announced that emergency maintenance and analysis was required of the USS Harry S. Truman to repair the ship’s electrical distribution system.

“The ship is working closely with technicians from Norfolk Naval Shipyard to determine the cause and scope of the issue. The safety of the ship’s crew and reactor plants are not affected,” US Fleet Forces Command spokesman Capt. Scott Miller informed USNI News on August 30.

To make up for the loss of a carrier and air support, US 2nd Fleet Commander Vice Adm. Andrew Lewis informed the outlet that the SAG would be significantly beefed up.

“So really a full-up group, minus the carrier and the air wing. But a full-up, very capable group is going off to do the nation’s bidding in this great power competition.”

Accompanying helicopters are reported to belong to Helicopter Maritime Squadron 72, which is stationed in Jacksonville, Florida.

Earlier this year, US Vice President Mike Pence announced to service members at the Norfolk Naval Base in Norfolk, Virginia, that the Trump administration would be reversing course on the anticipated early retirement of the USS Harry S. Truman.

Despite Pence’s claim that the “USS Harry S. Truman is going to be giving 'em hell,” the US’ East Coast is still without an aircraft carrier at the moment, as the USS Dwight D. Eisenhower, the other deployable vessel, is only now in its basic training phase.

“We fully intend to deploy the aircraft carrier at a later time,” Lewis claimed Thursday. “We obviously can’t talk about the timeframe right now and what it’s going to be right now, but we’re pressing forward with that, and it will deploy and rejoin the group at some point.”