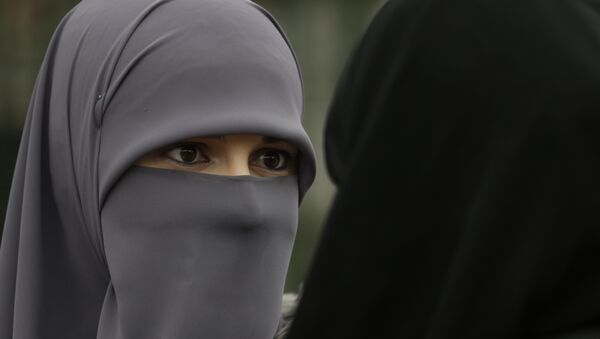 © AP Photo / Amel Emric
Subscribe
A University of Stavanger associate professor has argued that Islam and feminism are not only quite compatible, but actually share a strong historic affiliation.

Norwegian scholar of religion and associate professor at the University of Stavanger Marianne Hafnor Bøe has surprised the public by presenting an array of “feminist interpretations of Islam” in her new book.

The book purports to present a feminist perspective on Islam and its scriptures, highlighting “both historical trends and current trends of feminism in Islam, as they emerge in different ways and various places such as Iran, Morocco, Saudi Arabia, Malaysia, the US, and Norway”. “Feminism in Islam” deals with relations between the sexes, female leadership, and issues related to female sexuality.

By Bøe's own admission, she has been indirectly working with these topics for many years. Since she admittedly received a lot of inquiries from readers and students, she decided that there was a need for an introductory book that highlights feminist interpretations of the Quran and Islam.

“People are simply not very familiar with Islam, despite decades of immigration and cultural exchange. The knowledge here in Norway is more limited to the cultural baggage that comes from the majority Muslim countries, and not so much to the religion and theology itself”, Bøe told the news outlet Utrop. According to her, many of the feminist views are closer to the religion itself than so-called secular Muslim thought.

According to Bøe, while Islam is known for gender-discriminatory customs, its religious practice contains a plethora of variations.

“Islamic religious practice and theology can be interpreted to justify both gender discrimination and gender equality. We find examples of both”, Bøe explained.

By her own admission, the goal is to reflect the diversity of Islam that includes various forms of feminism and gender equality.

Marianne Hafnor Bøe is Associate Professor of Religious Studies at the University of Stavanger and has written research articles on halal dating among young Norwegian Muslims, women's activism in Iran and Sudan and feminist approaches to Sharia law. Her book “Feminsm and Islam” will be out in October.

A 2017 study estimated that Islam has 1.8 billion adherents, or close to a quarter of the world's population. Norway's own Islamic community has grown exponentially over the past few decades and is now estimated to constitute 5.7 percent of the country's population of 5.2 million.

In a comprehensive 2017 poll, 97 percent of Norwegian Muslims said they were fully in favour of gender equality. At the same time, close to one-third of the respondents claimed it was important to follow sharia, which left analysts perplexed.

000000
Popular comments
It never ends does it, it doesn't matter how many woman get hurt, raped & killed, there is always a feminist ready to defend the people & ideology that perpetrated those heinous acts. It never ends.

Dungeon Ambassador from Terra
13 September 2019, 14:14 GMT2
000000
Feminist Islam is an oxymoron, and feminism is just one of many instruments the Globalist elite uses to infiltrate all types of societies, and cultures to destroy them, in the name of equal rights of course.