Video: 2,500 People Missing in Bahamas as Death Toll Rises to At Least 50 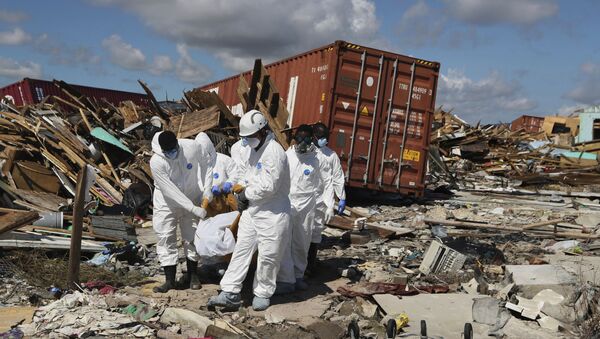 At least 50 people are dead and around 2,500 people reported missing after Hurricane Dorian slammed into the Bahamas on August 29 as a Category 5 Hurricane, devastating the archipelago in the Atlantic Ocean.

​Although around 2,500 are reported as missing, some of those people might have evacuated the islands or found refuge in shelters. According to Carl Smith, a spokesperson for the country’s National Emergency Management Agency, the number of missing people is expected to decrease.

​"At this point there are approximately 2,500 on the Bahamian government register," Smith said at a press conference Wednesday, BBC reported.

"This list has not yet been checked against government records of who is staying in shelters or who have been evacuated," he added.

Forty-two and eight bodies have been recovered in Great Abaco and Grand Bahama, respectively, according to Anthony Ferguson, commissioner of the Royal Bahamas Police Force. However, the official death count is expected to increase.

​Emergency responders and aid workers are also struggling to provide victims with supplies.

"Anywhere we could put a warehouse has been destroyed by floodwaters and may not be safe for storing supplies. Communications are down; electricity is down," Christy Delafield, a member of the aid group Mercy Corps, recently told NPR. "Any of the things you would normally do in a response are going to be 10 times harder, because the systems that support them do not exist anymore."

In addition, many people on the ground in the Bahamas are unable to contact their loved ones, although Mercy Corps is actively working to provide phone chargers.

​"People not having a place to charge their phones, Mercy Corps is bringing in solar lanterns that have phone chargers so people can get word about where distributions are taking place, can have light so they're a little bit more safe," Delafield told NPR's Morning Edition. "They can contact their loved ones. They can contact emergency services."

​According to World Food Programme estimates, Dorian devastated around 13,000 homes in the Bahamas, leaving more than 70,000 people stranded.

More than 1,400 people also arrived in the US over the weekend on a cruise ship from the Bahamas, with hundreds more hoping to do the same. However, many were denied entry into the US for not having visas.

​"I think it’s important to note that if those folks did stay on the boat and arrived, we would have processed them, vetted them and worked within our laws and protocols and done what we had to do to facilitate them. I think it was a business decision by [ferry service] Balearia to remove them. They were not ordered off the boat by any government entity,” US Customs and Border Protection Acting Port Director Stephen Silvestri recently WSVN.

A White House official said Wednesday that the US has no plans to invoke protected immigration status for Bahamians in the US following the hurricane.