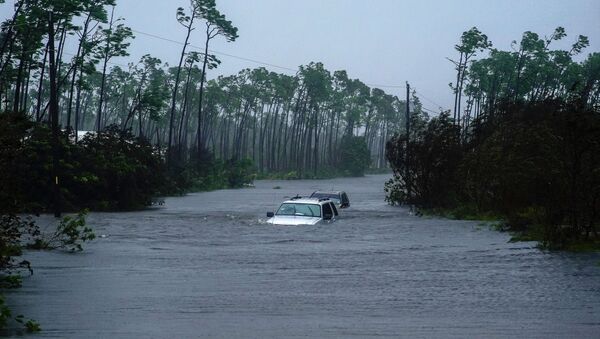 Hurricane Dorian, now a Category 2 storm with sustained winds of 110 mph, began moving up the southeast coast of the US Tuesday, after slamming the Bahamas over the weekend as a Category 5 hurricane and spilling 30 inches of rain.

​Bahamian Prime Minister Hubert Minnis announced Monday that at least five people on the Abaco Islands in the northern Bahamas have died since the hurricane hit, calling the “devastation” from the storm “unprecedented” and “extensive,” NPR reported. The hurricane has been devastating northwest Bahamas ever since it made landfall in the Abacos Sunday morning.

​"It's not safe to go outdoors," Bahamian Foreign Affairs Minister Darren Henfield also warned Tuesday, local Florida outlet WESH 2 reported. "Power lines are down. Lamp posts are down. Trees are across the street. It is very dangerous to be outdoors." Many people in the Bahamas were stranded on their rooftops or attics, the New York Times reported.

​The storm is not expected to leave the Grand Bahamas area until Tuesday night, according to Kevin D. Harris, director general of the Bahamas Information Center.

“We are already hearing from residents [in the Bahamas] that whole towns have been wiped out and devastated,” Harris told the New York Times. “This is going to be a big search-and-rescue and rebuilding effort. I don’t think we have seen anything as bad as this. This one is for the history books.”

​During the week, Dorian could have significant impacts on Florida’s Atlantic coast, as well as in Georgia, North Carolina and South Carolina, Weather.com reported.

​As of Tuesday morning, Dorian was 105 miles east of Fort Piece, Florida, according to the National Hurricane Center (NHC). The storm was moving at 2 mph and is expected to cause storm-surge flooding, rainfall flooding and beach erosion near the coasts of Florida, Georgia and southern South Carolina. Many residents along the coasts of Georgia, North Carolina and South Carolina began evacuating Tuesday after mandatory evacuation orders took place.

“I can’t decide for you, but I’m asking you, as the mayor of Savannah: Please attempt to get out of town as best you can, and come back in a few days and begin your life over and move forward,” Eddie DeLoach, mayor of Savannah, Georgia, warned Monday night, according to The Savannah Morning News.

According to FlightAware, at least 1,788 flights within, into or out of the US have been canceled as of Monday afternoon due to the hurricane.