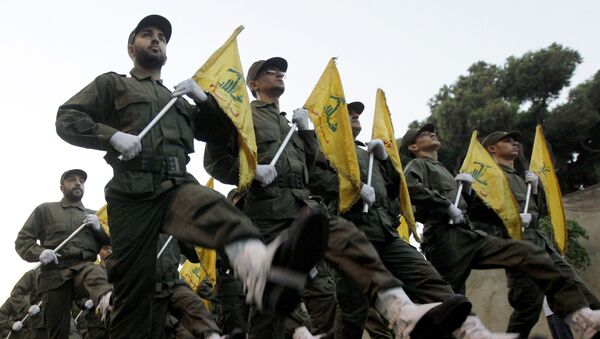 The televised statement by the secretary-general of the Lebanon-based movement Hezbollah comes amid a new wave of tensions with Israel that escalated in late August after Lebanese authorities claimed that Israeli drones had invaded its airspace, with one ostensibly crashing near the Hezbollah press centre.

Hassan Nasrallah has issued a stark warning to Israel, saying that if it attacks the group's positions, all Israeli "borders and forces will be at risk".

In what he described as a clear "message" to Israel, the Hezbollah leader said that the latest escalation of tensions marked the "start of a new phase", adding that the Lebanon-based movement "no longer" has red lines. He also vowed to attack "deep inside" Israel if the movement was targeted again.

Nasrallah continued by saying that "there is a new battlefield which is targeting Israeli drones in Lebanon's skies" in an apparent reference to last week's incident in which two alleged Israeli UAVs crashed near Beirut.

His statement comes a day after the IDF and Hezbollah exchanged fire, with the latter launching numerous anti-tank missiles at Israeli positions, while Tel Aviv hit back by firing over 100 artillery shells into southern Lebanon.

Hezbollah fired 2-3 anti-tank missiles from Lebanon, hitting an IDF military outpost and ambulance in northern Israel. We fired at the Hezbollah squad responsible. No Israelis were injured in the attack.

Nasrallah appeared to reiterate his previous comments, in which he addressed the professed Israeli drone incident, describing it as a "suicide mission". It was reported last week that one drone allegedly fell in the southern suburbs of Beirut, while a second UAV exploded in the air on 25 August, a Hezbollah official was cited as saying by Reuters. The source claimed that the drones were Israeli. The blast reportedly caused significant damage to the Hezbollah press service's building and left three people wounded.

He vowed that Hezbollah would "do everything to prevent" attacks of that sort in the future, arguing that the time when Israel could bomb Lebanon was "over". The movement's leader went on to say that they had entered a new phase in the long-standing conflict with the Jewish state.

Israel and Hezbollah fought a 34-day war in the summer of 2006, when Israeli forces invaded Lebanon after the militant group kidnapped two Israeli soldiers in a cross-border raid. The confrontation claimed the lives of roughly 1,300 people and ended in a UN-brokered ceasefire.