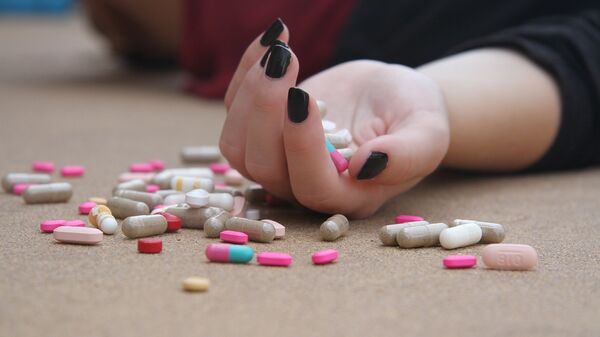 Pharmaceutical giant Johnson & Johnson was ordered to pay $572 million to Oklahoma for its role in the state’s opioid epidemic. While there are certainly more suits and settlements to come, companies’ aversion to financial accountability may result in the American public seeing a repeat of the tobacco industry's addiction-related accord in the late 1990s.

On Monday, Cleveland County District Judge Thad Balkman declared that "the opioid crisis has ravaged the state of Oklahoma” and ruled that Johnson & Johnson should pay $572 million for its role in fueling the epidemic.

Though the pharmaceutical giant was not ordered to pay the $17 billion the Oklahoma attorney general was seeking, the company maintains that its business practices were ethical, according to a statement published after the verdict. Johnson and Johnson is expected to appeal Balkman’s decision in the state’s supreme court.

“That’s the message to other states: We did it in Oklahoma. You can do it elsewhere,” Oklahoma Attorney General Mike Hunter said on Monday. “Johnson & Johnson will finally be held accountable for thousands of deaths and addictions caused by their activities.”

NBC reported Tuesday that drugmaker Purdue Pharma was in months-long talks with local and state government lawyers to settle roughly 2,000 lawsuits concerning its role in supplying opioids - a deal that would see it declare bankruptcy and pay out as much as $12 billion.

Dr. Louis Kyriakoudes, a professor at Middle Tennessee State University and director of the Albert Gore Research Center, joined Radio Sputnik’s Loud and Clear on Tuesday to discuss the ruling and draw comparisons between the opioid epidemic settlements versus those of the late ‘90s involving tobacco.

The professor began by explaining that neither the pharmaceutical industry nor everyday people take into account what happens to a drug-addicted brain.

“These deaths happen one-by-one, and there’s a tendency for people to blame the victim, because, you know, their brain is at war with their body, and they are compelled to take these substances,” Kyriakoudes told hosts Brian Becker and John Kiriakou. “A lot of people don’t quite understand how powerful the addictive impulse is and how it really is a brain disease and how it is … a form of injury that happens to these people, and it’s not their fault.”

Despite this reality, Johnson & Johnson’s statement following the Monday ruling claimed the company and its profits were not to blame, because “the FDA-approved labels of these medicines provide clear information about their risks and benefits.”

Kyriakoudes asserted that the “proactive promotion of these opioid drugs” is quite similar to the tobacco industry marketed its products in the past.

“There are some similarities and differences between the [Master Settlement Agreement (MSA)] of the 1990s and what is emerging here in the opioid pharmaceutical industry litigation,” he said.

Kyriakoudes said that although the accord brought about a number of changes to how tobacco could be marketed, the 46-state agreement hardly made a dent in the massive industry and hardly swayed public health.

“You can think of the costs to the states incurred by the Master Settlement as a tax. It’s about 68 cents per pack.”

With lawsuits piling up against the pharmaceutical industry in response to the opioid crisis, Kyriakoudes believes it’s possible a similar framework will be adopted and little will be done to prevent further public harm.

According to “A State-by-State Look at the 1998 Tobacco Settlement 20 Years Later” by the Campaign for Tobacco-Free Kids, states reaped $27.5 billion from the MSA and tobacco taxes in Fiscal Year 2018, but spent less than 3% of it on programs to stop children from picking up the habit or helping chronic smokers quit.

It’s also worth noting there is no US state that funds tobacco prevention at the level recommended by the Centers for Disease Control and Prevention (CDC).