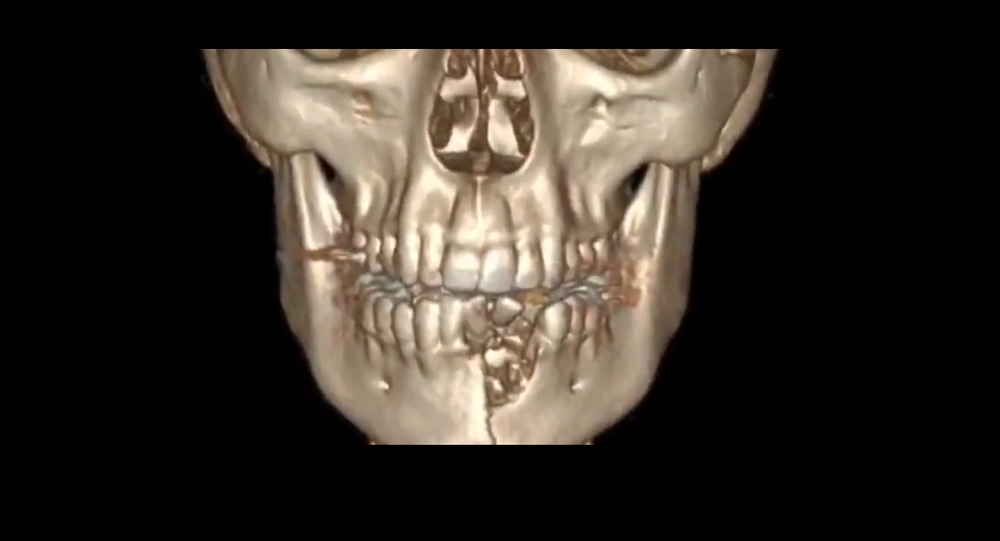 A Nevada teen underwent reconstructive surgery and now has titanium plates in his jaw following a 2018 accident in which his vape pen exploded, shattering a chunk of his jawbone and cracking his entire mandible.

On Thursday, The New England Journal of Medicine (NEJM) posted shocking images of 17-year-old Austin Burton, who appeared to have been in a high-speed car wreck rather than the victim of a vape pen.

In addition to a fractured mandible, a chunk of the teen’s jaw was missing, and a hole was created through his chin, according to the article accompanying the graphic images.

“I’ve dealt with lots of facial trauma . . . and dealt with some really kind of exotic things like grizzly bear attacks and things like that, but this is one that I had never seen before,” Jonathan Skirko, the teen’s surgeon, told the Washington Post Thursday.

Kailani Burton, Austin’s mother, revealed to the Post that she approved the teen’s use of the device as a way for him to quit smoking, despite vaping being illegal for those under the age of 18 in Nevada – even if the vape juice used contains no nicotine.

Soon after granting approval, Burton purchased her child a vape pen from the e-liquid company VGOD. It’s unclear what model the teen selected for his mother to purchase.

“I told him, ‘You’ve got to be careful, these things have happened,’” Burton claimed. “They get hot.”

YouTube/VGOD
VGOD Elite Series Mech Mod, one of VGOD's vaporizers that were available for sale when Austin Burton was looking to purchase a device from the company. It's not clear what model Burton was using during his 2018 incident.

Burton’s fears became reality on March 26, 2018, when she heard a sound she originally believed to be a circuit breaker activating. Recounting the event to the Post, Burton says her other son ran into the room and “he was screaming, ‘It blew up! It blew up!’”

The mother says she immediately drove her son to the hospital in their hometown, but ultimately had to drive 200 miles, a five-hour trip, to Salt Lake City, Utah, because the local facility was not equipped to treat Austin’s injuries and could only pack his wound with gauze.

© Photo : Rex Features
America’s Next Epidemic? More US Teens Are Vaping Than Ever Before - Study

Though Austin has made a recovery and was able to graduate from high school on time, Burton admits that she was extremely fearful last year.

“I thought he could’ve been dead,” she told the Post. “I could’ve lost him.”

Months after Austin’s accident, a 24-year-old man from Fort Worth, Texas, was not as lucky. Shortly after purchasing his first vape pen to quit smoking, like Austin, William Brown’s device battery had a malfunction and exploded, sending debris through face and neck and severing his left carotid artery, resulting in his death.

A 2018 report published in BMJ Journals reveals that from 2015 to 2017, an estimated 2,035 vaporizer or e-cigarette explosions resulted in hospital visits. As vaping continues to become a way to ingest nicotine and wean oneself off cigarettes and other forms of tobacco, those injury numbers are also expected to rise.

Most burns and explosions have to do with the devices’ batteries (generally ones purchased from third-party vendors) limits being pushed, triggering a malfunction and explosion or overheating. Sites such as Steam-Engine.org offer an Ohm’s law calculator and video tutorial on safe usage for vaping devices and information related to their “optimal resistance range.”