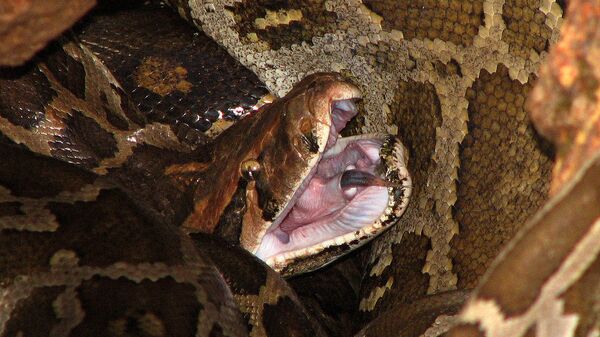 On Monday, the Florida Fish and Wildlife Conservation Commission (FWC) announced that Kevin Reich, a member of their Python Action Team, successfully nabbed an invasive 17-foot-9-inch female Burmese python that weighed about 83 pounds.

Despite the serpent’s remarkable size, the social media announcement explains that this particular python ranks second in length among the team’s catches. Back in December, the Python Action Team caught another female Burmese python measuring 18 feet long and weighing around 147 pounds.

Earlier this month, Florida Governor Ron DeSantis spoke at Everglades Holiday Park and announced the state would be taking additional steps to fight against the growing Burmese python population in the Everglades.

"They're not native to this area, and they're an incredibly invasive species," the governor asserted on August 7. "As these pythons have permeated through, they've really disrupted the natural food chain balance, they've threatened endangered species, they've decimated other animal populations. They can eat small alligators, even.”

The FWC website explains that the Burmese python, which is native to Southeast Asia and was initially domesticated when brought to Florida in the 1970s, “represents a threat to native wildlife” around and within the Everglades ecosystem. Bobcats, foxes, opossums, raccoons and other wildlife have all been found in the stomachs of the non-native pythons, according to a 2012 study from the United States Geological Survey.

In addition to the Python Action Team, Florida offers free training on how to humanely kill and remove pythons. There’s also the incentive-based “Python Pickup Program” which lets everyday people submit a Burmese python for the chance to win a “valuable prize.”

While the average adult serpent measures between 8 and 10 feet in Florida, pythons caught in recent months have far exceeded expectations.

Back in April, Sputnik reported that another 17-foot Burmese python was captured by scientists at Big Cypress National Preserve. The team was able to locate this snake, which was carrying 73 eggs, through radio transmitters previously stuck to male pythons.