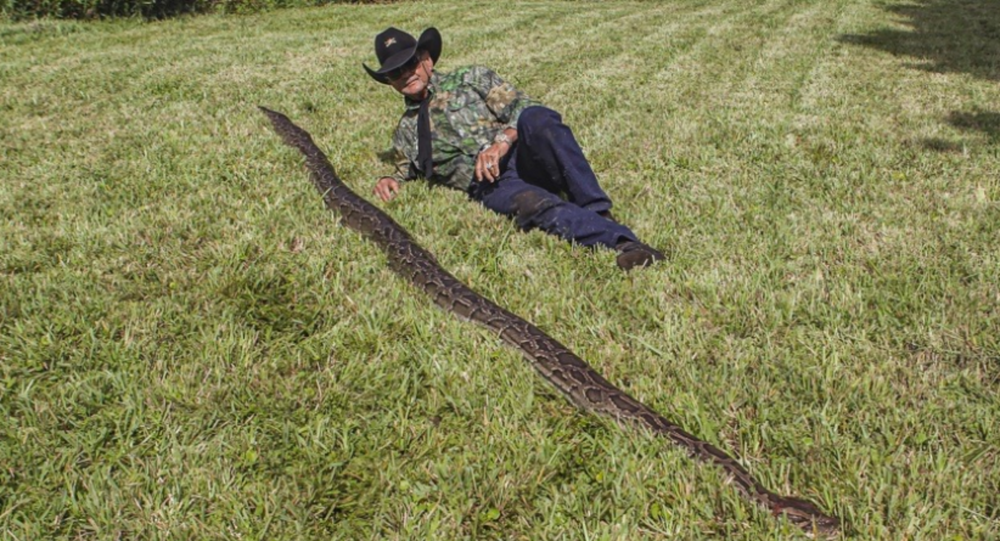 During the weekend, a 16-foot Burmese python and its nest of more than 50 eggs were removed from under a house in the Florida Everglades.

The python, which was discovered by two campers beneath a home in Broward County, weighed about 165 pounds. The female snake was removed by Ron Bergeron, an Everglades conservationist.

“The Burmese python poses a significant threat to the Florida Everglades by disrupting the natural food chain,” Bergeron, who also goes by “Alligator Ron,” told the South Florida Sun-Sentinel. “With good fortune, we were able to find a large female, and remove her and an entire nest of up to 50 baby snakes which would have continued killing off our precious habitat.”

​Some of the eggs hatched while Bergeron was removing the snake, which was just one foot shorter than the largest Burmese python to ever be captured in the Everglades.

According to the US Department of Agriculture, the Burmese python, which is one of the five largest species of snakes in the world, is considered an invasive species in Florida.

An invasive species is “an alien species whose introduction does or is likely to cause economic or environmental harm or harm to human health.” The snake eats Florida’s native wildlife, including rabbits, possums, deer and bobcats, thereby contributing to declines in mammal populations.

The Florida Wildlife Commission and South Florida Water Management District have set up an eradication program in which people who catch the snakes are rewarded for helping protect the environment.

“I want to thank the governor for making the eradication of the Burmese python a top priority,” Bergeron told CBS Miami. “He has asked both state agencies to work with our federal partners (Everglades National Park) to find ways to increase access to remote areas so we can engage more qualified personnel to remove this invasive snake.”

Woman Casually Goes to Russian Bank With a Snake

Dancing Like a Madman: Crazy Snake Makes Some Hard-Core Moves