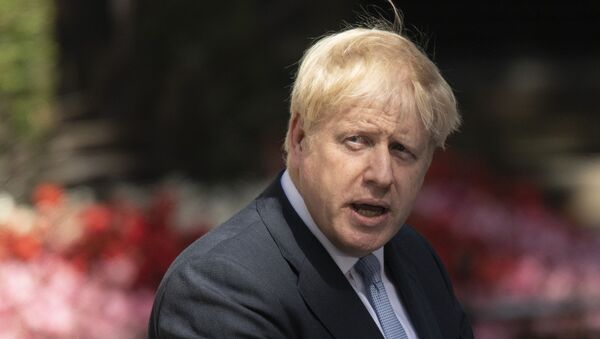 The prime minister's spokeswoman said earlier in the day that Johnson was happy to accept the rest of former PM Theresa May’s Brexit withdrawal agreement if the backstop was removed, adding that he had been clear the only changes he wanted were about the backstop.

UK Prime Minister Boris Johnson has told EU Commission President Jean-Claude Juncker that unless the EU withdrawal agreement is reopened and the Irish backstop abolished, there is no prospect of a Brexit deal, the prime minister's office stated.

"The Prime Minister set out that the UK will be leaving the EU on 31 October whatever the circumstances, and that we absolutely want to do so with a deal. The PM was also clear however that unless the Withdrawal Agreement is reopened and the backstop abolished there is no prospect of that deal", a spokeswoman for the PM's office stated.

According to the office, Johnson had a "positive and substantive conversation" with Juncker.

Earlier in the day, UK opposition parties led by Labour leader Jeremy Corbyn issued a joint statement stressing that they agreed to prevent a no-deal Brexit.

Prior to that, the British government expressed an intention to renegotiate Theresa May’s Brexit deal with the EU. The prime minister's spokeswoman stated on 27 August that he has set out a "range of options" as an alternative to the Irish backstop.

On 20 August, the UK prime minister had published a four-page letter to President of the European Council Donald Tusk with new proposals regarding Brexit, particularly the future of the border between Northern Ireland and the Republic of Ireland.

One of the main obstacles in the EU-UK Brexit talks has been the Irish backstop, a solution that entails keeping Northern Ireland in the EU Customs Union, which is now being abolished by newly appointed Prime Minister Boris Johnson.

The new prime minister has made it clear that he wants the United Kingdom to leave the European Union on 31 October "come what may”, although he said he preferred an orderly exit.