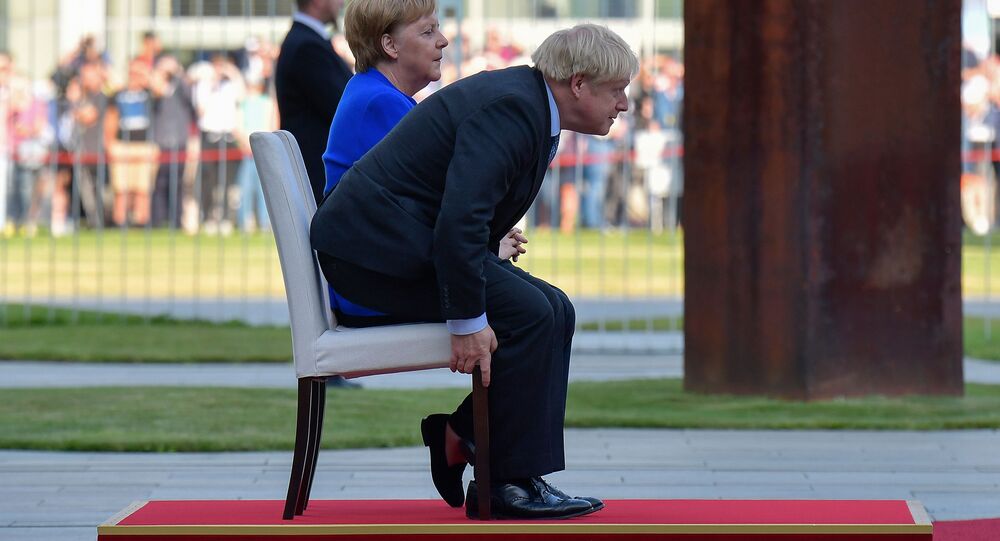 With the Brexit deadline approaching, UK Prime Minister Boris Johnson has called upon the EU to remove the Irish backstop from the Withdrawal Agreement. According to UK-based geopolitical analyst Adam Garrie, there are several probable reasons behind Johnson's move.

The EU has reportedly started mulling over potential alternatives to the Irish backstop in order to avoid a no-deal Brexit, The Sun observed Thursday, citing EU sources.

While Berlin and Paris voiced scepticism over the possibility to re-negotiate a Brexit deal with just 70 days left before the 31 October deadline, they agreed to take a look at potential alternatives.

It was Angela Merkel who first gave hope to the British prime minister by saying that she sees "possibilities" to solve the backstop problem if the UK government comes up with a workable concept within the next 30 days.

Later, however, the German chancellor further clarified that she had not meant a rigid deadline: "The 30 days were meant as an example to highlight the fact that we need to achieve it in a short time because Britain had said they want to leave the European Union on October 31", she said, as quoted by Reuters.

"Even during Theresa May's period at Number 10, Merkel constantly played the proverbial 'good cop' to just about everyone else's 'bad cop'", explains Adam Garrie, a UK-based geopolitical analyst and director of the Eurasia Future think tank. "The reasons underlying this is that more than any other EU member, Germany relies on the UK as a major market for exports."

According to the analyst, "those selling Mercedes-Benz, Volkswagen, BMW and other high quality products do not want to see their goods face tariffs when entering the lucrative UK market."

"Thus, Europe is not only playing a game of chicken with the UK but also with itself. On the one hand, in the fashion of an old hanging judge, the EU wants to 'make an example' of Britain but on the other hand, multiple EU companies in general and those in Germany in particular cannot afford to lose the UK as an export market – especially as Germany stands on the verge of the recession," Garrie added.

The think tank director believes that it's hard to say who really has an upper hand in the ongoing talks – the UK or the EU. At first glance, he notes, "the EU have an upper hand due to the fact that there are 27 nations potentially against one".

"But in terms of practicality, the EU 27 export more to the UK than the UK exports to the EU 27", he said.

Irish Backstop 'Designed to Keep Britain Beholden to the EU'

The Irish backstop is an EU "insurance" policy, negotiated by former British PM Theresa May, aimed at preventing a "hard" border between the UK's Northern Ireland and the Republic of Ireland, a EU member state, after Britain leaves the bloc. Currently, there are no checks on goods or people at the border.

The EU and the Republic of Ireland voice concerns that if a "hard" border is re-instated, two parts of Ireland will be in different customs and regulatory regimes which could negatively affect the island's trade, deepen divisions between the north and the south and reignite tensions that were eased by the Good Friday Agreement of 1998. The return of a hard border is also fraught with the risk of a revival of nationalist paramilitary groups, Northern Ireland police have warned, as quoted by the Guardian.

However, in the UK, Conservative MPs sees the Irish backstop as yet another Brussels' trap aimed at keeping the UK in the bloc's fold. They argue that the provision would force Northern Ireland to adhere to EU rules even after Britain's withdrawal.

In his 19 August letter to European Council President Donald Tusk, Johnson highlighted that the backstop provision:

·         is "anti-democratic and inconsistent with the sovereignty of the UK as a state";

·         is "inconsistent with the UK's desired final destination for a sustainable long-term relationship with the EU";

·         "risks weakening the delicate balance embodied in the Belfast (Good Friday) Agreement" between the UK, Northern Ireland and the Republic of Ireland.

Garrie suggests that the much-discussed provision is "designed to keep Britain beholden to the EU on a potentially long-term basis".

"Because of this, it has become a major sticking point for Brexiteers although it is important to remember that it is not the only element of the May-Barnier withdrawal treaty that Brexiteers dislike," he notes.

The question remains open as to whether British PM Johnson will be able to come up with an alternative to the Irish backstop while the UK's time is running out.

Boris Johnson refers to the Alternative Arrangements Commission that according to its chairs, Conservative MPs Greg Hands and Nicky Morgan, had found a way "to supersede the maligned Irish backstop, while simultaneously ensuring there is no hard border in Ireland and the Belfast / Good Friday Agreement is upheld".

The report envisages the introduction of the so-called Trusted Trader Programme for businesses, the establishment of special economic zones near the border and the inception of a common sanitary and phytosanitary (SPS) area in Northern Ireland in accordance with EU SPS rules.

However, some hardline Brexiteers have already signalled that the implementation of a backstop alternative would not be enough to avoid a no-deal exit.

"Other points of contention are the 'divorce payment' of £39 billion, the inability to exit the customs union with immediate effect, questions over the jurisdiction of EU courts and questions over the highly controversial EU fisheries policy," says Garrie.

He stresses that "many Brexiteers are worried that Johnson is merely going to re-heat May's unpopular treaty minus the backstop whilst others still hope that Johnson might aim to secure some sort of FTA from Brussels." Garrie does not rule out that "Johnson is merely bluffing in order to buy time on the way to a WTO Brexit."