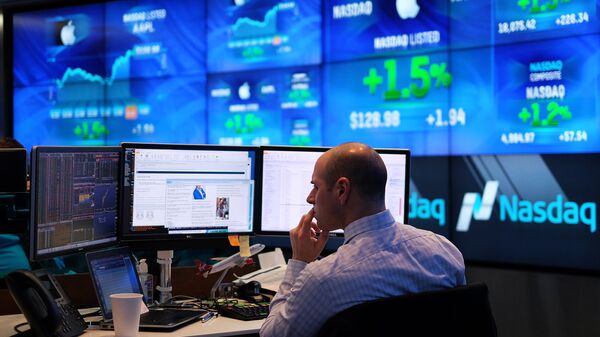 The US-China trade war has further escalated as both countries moved to impose new tariffs, causing shares of major US companies to plunge deep into the red.

While attending the G7 summit in Biarritz, France, US President Donald Trump has stated that he was "not concerned" about the markets' reaction to his decision to increase existing tariffs on $250 billion worth of Chinese goods from 25 percent to 30 percent starting 1 October.

Asked if he had any doubts about escalating the trade war with Beijing, Trump responded by saying that he had "second thoughts about everything".

The US president reportedly said that he had no plans to declare a national emergency on China "right now", even though he has "the right to", and insisted that despite the spiraling trade dispute, "we're getting along well right now with China".

Trump adds that while he can do it, he has no plans to declare a national emergency on China right now. Says “Actually we’re getting along very well with China right now. We’re talking. I think they want to make a deal much more than I do”

POTUS earlier told reporters that he had "the absolute right" to order US companies to stop doing business with China by invoking the 1977 International Emergency Economic Powers Act (IEEPA), a law which authorises him to regulate transactions following a declaration of national emergency in response to "any unusual or extraordinary threat to the United States".

Hours after his announcement, the Dow Jones Industrial Average plunged more than 600 points on Friday, while the S&P 500 closed 75.84 points lower, and NASDAQ plummeted 239.62 points.

His Friday order demanding the withdrawal of American companies from Chinese soil followed Beijing's announcement of quid pro quo tariffs on roughly $75 billion worth of US goods, including agricultural products and crude oil, as well as penalties on US imports of cars and automobile parts, starting 1 September and 15 December.

The Chinese Commerce Ministry said in a statement that the decision to introduce additional measures was forced by Washington's "unilateralism and protectionism".

In a series of tweets on Friday, the US president reiterated his long-standing accusations against China, having once again claimed that Beijing had "been taking advantage of the United States on Trade, Intellectual Property Theft, and much more" for years.

....Sadly, past Administrations have allowed China to get so far ahead of Fair and Balanced Trade that it has become a great burden to the American Taxpayer. As President, I can no longer allow this to happen! In the spirit of achieving Fair Trade, we must Balance this very....

The United States and China have been mired in an ongoing trade war since June 2018 when Trump announced that he was introducing 25 percent tariffs on $50 billion worth of Chinese imports in a bid to fix what he called "unfair trade practices". Since then, the two sides have resorted to several rounds of tit-for-tat measures.