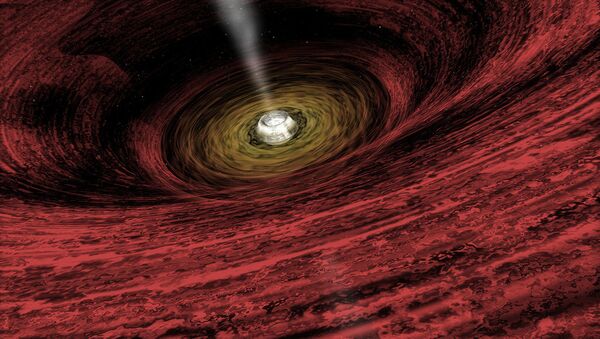 Svetlana Ekimenko
All materialsWrite to the author
Earlier this year, scientists released the first-ever image of a black hole, revealing the distant object in stunning detail, using the Event Horizon Telescope, an international project involving telescopes across the globe.

A team of scientists says a black hole swallowing a neutron star has likely been spotted for the first time.

A partner in the study, the Australian National University, clarifies in a statement that on 14 August 2019 gravitational-wave discovery machines in the US and Italy detected ripples in space and time from a cataclysmic event that happened about 8,550 million trillion kilometres away from Earth.

"About 900 million years ago, this black hole ate a very dense star, known as a neutron star, like Pac-man -- possibly snuffing out the star instantly", said Professor Susan Scott, leader of the General Relativity Theory and Data Analysis Group at ANU and a chief investigator with the Australian Research Council's Centre of Excellence for Gravitational Wave Discovery (OzGrav), in the statement.
"The ANU SkyMapper Telescope responded to the detection alert and scanned the entire likely region of space where the event occurred, but we've not found any visual confirmation".

According to ANU, which plays a lead role in Australia's partnership with the Advanced Laser Interferometer Gravitational-wave Observatory (LIGO), the data points to a strong likelihood of a black hole devouring a neutron star.

Clarifying that neutron stars and black holes are the super-dense remains of dead stars, the scientists confirmed they were still analysing data to work out the size of the two objects.

The Advanced Laser Interferometer Gravitational-wave Observatory (LIGO), operated by Caltech and MIT, detected the event, as well as the sister facility Virgo near Pisa, Italy.

Earlier this year, in another fascinating study, the Event Horizon Telescope helped scientists release the first-ever image of a black hole. The black hole was spotted in galaxy Messier 87 (M87), 55 million light-years away.

The discovery was made by an international project involving telescopes across the globe that describes itself as a “virtual Earth-sized telescope", with telescopes in Hawaii, Arizona, Chile, Mexico, Spain, and the South Pole involved in the research.