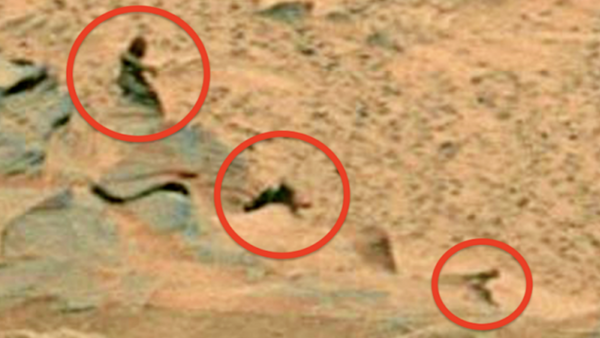 The objects allegedly depicted in the photo were described by the UFO hunter as statues of a woman, a man and a child, though the accuracy of his assessment remains suspect.

Prominent UFO hunter Scott C. Waring, who previously spied a possible new underground facility at Area 51 and an "Asian Atlantis" on the seabed near Japan, has once again turned his attention to space, announcing the discovery of what he believes are alien artefacts on NASA’s photos of Mars.

Detailing his findings in his blog UFO Sightings Daily, Waring claimed that the objects featured in the photo are the statues of a woman, a man and a child, and described the alleged sculpture of the female as "the Mona Lisa of Mars."

"The statue of a woman has a highly detailed green robe, which you can see the folds within it. She has long hair down to the shoulders, a thiner waste (sic) and here arm is also covered with here robe sleeve up to the wrist area, where the color of her hand turns to pinkish. Her figure is undoubtedly that of a human-like female", he wrote, describing the objects he saw in the pictures. "The man (is) laying down in front of her also has a green outfit on. He has a bald hairless head that is pink. The little child in front of them is less obvious to the untrained eye. He is sitting down, legs forward and arms behind himself".

The conspiracy theorist also claimed that he reported another NASA photo featuring these objects some nine years ago, but the US space agency apparently deleted that picture.

Waring has previously made a number of claims related to various peculiar objects he allegedly found on NASA photos, such as alien tech on asteroid Bennu or an alien base on the surface of the Moon, but the US space agency attributed at least one of his discoveries to the effect of pareidolia – a psychological phenomenon where people see recognisable shapes in clouds, rock formations, or otherwise unrelated objects or data.