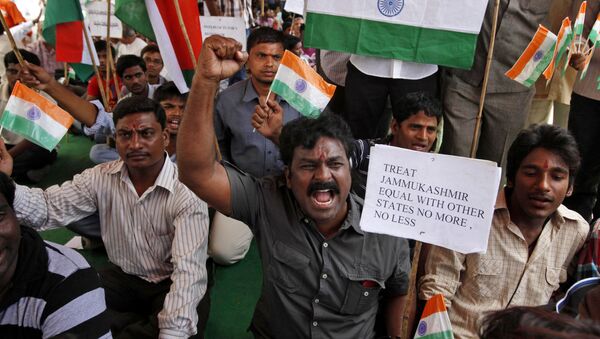 Article 370 of the Indian Constitution gives special status to the State of Jammu and Kashmir. India controls the southern portion of Kashmir, a region that has historically been hotly contested between India and Pakistan.

The Indian government has moved to scrap Article 370 of the national constitution, which grants special autonomy to the state of Jammu and Kashmir, the Muslim-majority Indian-controlled part of Kashmir.

Home Minister Amit Shah told the upper house of parliament on Monday that the government would abrogate the cause, prompting a massive uproar from opposition lawmakers.

Article 370 allows the state's local legislature, the Constituent Assembly of Jammu, to make its own laws and bans people from outside the state from buying property there as well as obtaining state government jobs and participating in state-sponsored scholarship programmes.

By rejecting the special status of Jammu and Kashmir, the national government is ensuring that the national constitution will now be applied throughout the Himalayan state.

Citing the threat of cross-border terrorism, Amit Shah announced that the state of Jammu and Kashmir will be divided into two union territories, governed directly by the central government – Jammu and Kashmir would be split from the mountainous region of Ladakh.

Ladakh will become a union territory without a legislature, while Jammu and Kashmir will have a legislative assembly like other Indian states instead of its own, more autonomous Constituent Assembly.

Pakistan's foreign minister, Mehmood Qureshi, claimed that the move violates a UN resolution on the status of Kashmir.

The measure, which will come into force "at once", comes hours after the government ordered restrictions and night curfews to be imposed on Jammu and Kashmir over fears that foreign terrorists were planning to target police officers there.

New Delhi has deployed thousands of additional troops to the Pakistan border to beef up security in Indian-ruled Kashmir, with mobile internet being shut down throughout the state. The authorities have told visiting pilgrims and tourists to leave the area, banning public meetings and advising regional schools to remain closed as a precautionary measure. Two former chief ministers of the territory have been placed under house arrest.

Kashmir has been divided between India and Pakistan since they gained independence in 1947. Both nations claim the entire region but control only parts of it. Over the past 70 years, the nuclear-armed foes have fought two wars and waged a limited conflict over the region.

An Islamist insurgency has engulfed Jammu and Kashmir in the past decades, with militants seeking secession from India. There have been reports of gunfights across the Line of Control – the de facto border with Pakistan – in recent days.

Peace talks between Pakistan and India have stalled, but speculation emerged last month that the United States could mediate a solution on Kashmir between the neighbouring nations.

Donald Trump told reporters that Indian Prime Minister Modi had asked him if he would like to broker a peace deal, but India denied that Modi had ever made such a request.

Although Pakistani Prime Minister Imran Khan, a Trump ally, has appeared to be willing to accept the US as a mediator, India responded that it would deal with Pakistan only bilaterally.