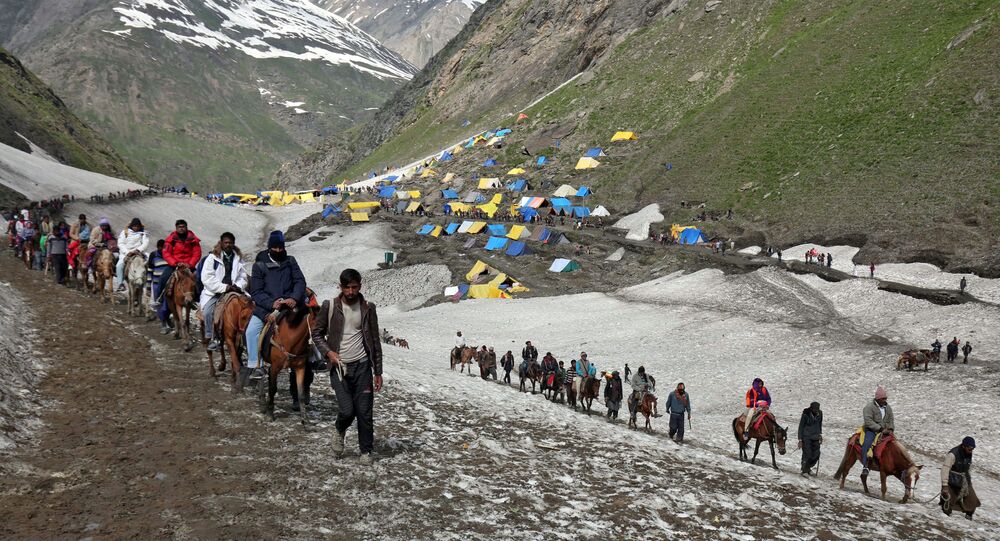 New Delhi (Sputnik): India’s northern Jammu and Kashmir government has ordered tourists and pilgrims to the Cave Shrine of Amarnath to return, in view of heightened terror threats. An order issued by the provincial government says that intelligence inputs indicate there are threats to the pilgrims.

The order, issued by the state Home Department on Friday said, "Keeping in view the latest intelligence inputs of terror threats, with specific targeting of the Amarnath Yatra, and given the prevailing security situation in the Kashmir Valley, in the interest of safety and security of the tourists and Amarnath Yatris, it is advised that they may curtail their stay in the valley immediately and take necessary measures to return as soon as possible".

Taking cognizance of intelligence inputs of #terror threats to #AmarnathYatra the #JammuandKashmir have asked the pilgrims to curtail their stay in the valley and return at the earliest.#AmarnathYatris #JammuKashmir #AmarnathYatra

​The Kashmir Valley has been witnessing intermittent cross-Line of Control (LoC) firing and infiltration by secessionists since 8 July. During the last three days alone, three civilians have been killed and over 30 injured on the Pakistan side in the skirmishes, while two civilians have been killed and over a dozen injured on the Indian side. Last week, India had also mobilised 10,000 troops into the valley in view of the security situation.

Lt. General K.J. S. Dhillon, commander of the Kashmir-based Chinar Corps, said on Friday that the level of violence is expected to further increase and therefore, the strength of ground troops has been reinforced.

Chief of Jammu and Kashmir Police Dalbir Singh told media that security forces have foiled an attempt to disturb the pilgrimage to the cave shrine of Amarnath.

Thousands of Hindus take the arduous 46 km trek covering snow clad glaciers and waterlogged trails to reach the cave shrine, where they worship an ice stalagmite considered the physical manifestation of the Lord Shiva, the destroyer among the Hindu Trinity. The shrine remains closed for most of the year, except for a limited period between May and September.

Kashmir, which has witnessed terrorism for several decades, has been on alert after the February terror strike in Pulwama, which killed 40 security personnel, and the retaliatory Indian bombing of terror camps in Balakot in Pakistan by the Indian Air Force.