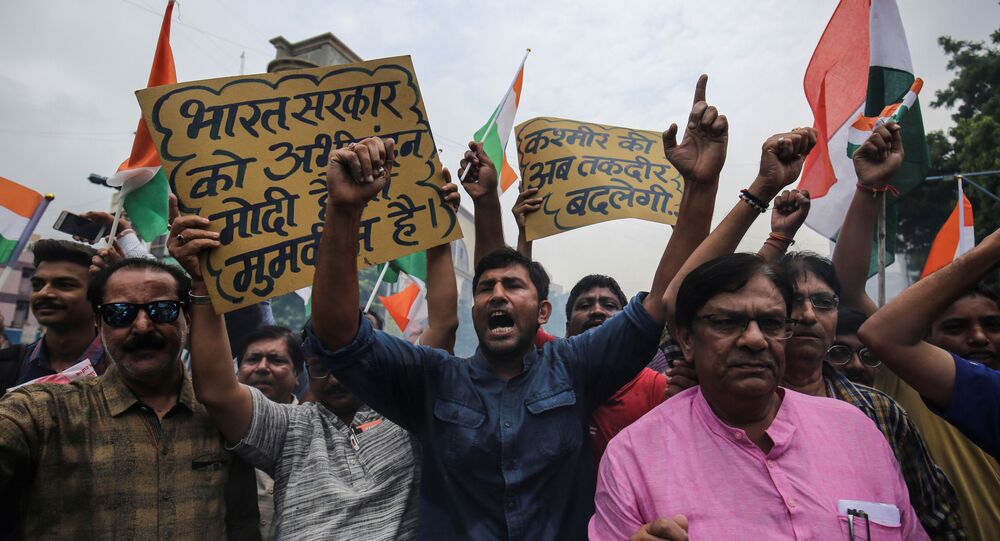 Earlier in the day, the Indian government abolished Article 370 of the constitution, which granted special autonomy to the Muslim-majority state of Jammu and Kashmir, controlled by India. The special autonomy allowed the state's legislature to make its own laws. It also banned people from outside the state from getting state government positions.

Pakistan is vowing to exercise every option at its disposal to counter India's move to abrogate the special status of Jammu and Kashmir, condemning New Delhi's move as 'illegal', a statement by the Pakistan's Foreign Ministry reads.

The Ministry underlined that India's unilateral action cannot alter the disputed status of the territory, which was enshrined by the UN Security Council resolutions.

Pakistani President Arif Alvi is convening a joint session of the nation's legislators to discuss India's move to abrogate Article 370 of the Indian Constitution on the special status of the state of Kashmir and Jammu.

In a tweet, the president condemned Delhi's latest move, saying that it violated UN Security Council resolutions as well as the will of the Kashmiri people.

India's attempt to further change status of Indian Occupied Jammu & Kashmir is against the resolutions of UNSC & against wishes of the Kashmiri people. Pakistan supports & insists on a peaceful resolution based on wishes of Kashmiri people & stands with them in their hour of need

— The President of Pakistan (@PresOfPakistan) August 5, 2019

​Earlier, Pakistan's Foreign Minister Mehmood Qureshi condemned India's move to revoke the special status of Jammu and Kashmir, saying that the revocation breaches UN resolutions on the status of the territory.

According to a copy of the order, the revocation of Article 370 will "come into force at once" and will "supersede the Constitution."

The law which provided Kashmir and Jammu with a special status, known as Article 370 of the Indian Constitution, granted the state its own autonomous constitution as well as decision-making rights in various domains with the exception of defence, foreign affairs and communications.

The United Nations Security Council has been actively engaged in mediation and the maintenance of peace in Jammu and Kashmir, passing 18 resolutions since the initial eruption of the conflict between India and Pakistan.