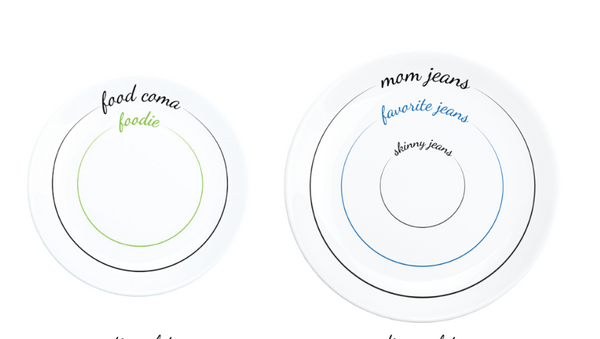 A collection of dinner plates was promptly discontinued at a major department store after netizens issued complaints saying the wares promoted eating disorders and other unhealthy habits.

A small business’ attempt at putting a light-hearted twist on portion control became tens of thousands of netizens’ source of outrage after Twitter user Alie Ward called out the novelty plates, which were available at Macy’s Herald Square location in Manhattan.

The particular dishes that Ward had an issue with have circles of increasing sizes etched on them, with the smallest saying “skinny jeans” and the largest labeled “mom jeans,” while the other plate went from “foodie” to “food coma.”

How can I get these plates from @Macys banned in all 50 states pic.twitter.com/1spntAluVl

The plates, sold by tableware company Pourtions, were designed to be a “humorous, healthy way to watch what you eat,” but according to Macy’s, which issued an apology a day later, the plates “missed the mark.” The major retailer even promised Ward that the novelty plates would be pulled from STORY, a section of the store that features items from small businesses.

Hi, Alie — we appreciate you sharing this with us and agree that we missed the mark on this product. It will be removed from all STORY at Macy's locations.

Many netizens applauded Ward using her social media influence to get the “dangerous” dishes removed from Macy’s shelves, with a number adding that the plates promote a culture of “body shaming” and could even trigger eating disorders and other unhealthy eating practices – particularly in young women.

This is a toxic message, promoting even greater women beauty standards and dangerous health habits. These expectations can actually kill someone, and I know someone it has. @Macys, remove this from all of your stores and denounce the manufacturer.

because it can be seriously triggering for say, people who are suffering or in recovery from an eating disorder. that's one of many reasons this shouldn't be up in the shelves

These labeled plates are AWFUL and I am glad Macy’s has agreed to remove them. This fuels eating disorders.

All these people trying to defend the shitty design... lol imagine thinking a circle labelled "skinny jeans" big enough to hold like two chicken nuggets is demonstrating "healthy portion control".... The only thing it's teaching is body shaming, and nothing to do with health.

Totally designed by some dude with a beer gut.

Others, however, dismissed Ward and others’ disdain for the dishes and instead asserted that the novelty plates were humorous, harmless and not being forced on consumers by simply sitting on display in the store.

I can understand you not liking them. But why do you get to decide that 300 million other people don’t get that choice?

Hi @Twitter, how can I get this account banned forever. Because I disagree with her thats why. Those are the new rules right? I no longer have to manage my own feelings, thoughts, or opinions...I will just force others to do it for me.

After reading the comments, I realize there are a lot of single cat owners that can't control their food intake.

That's funny. Does nobody have a sense of humor anymore?

I’m not a mom, but is “mom jeans” that offensive? Mothers are incredible ppl & I know supermodels that wear “mom jeans,” favorite jeans sounds nice as well, if anything this plate makes me want to eat more, skinny jeans are gross... not sure y u would want to ban these 🤷‍♀️

Despite the removal of their plates from Macy’s, the sheer exposure Pourtions received from the polarized Twitter community actually worked to their benefit, as orders have begun coming in quicker than they can fulfill them. The two-person company even issued a Facebook statement on Tuesday begging users to email them rather than attempt to order through their website.