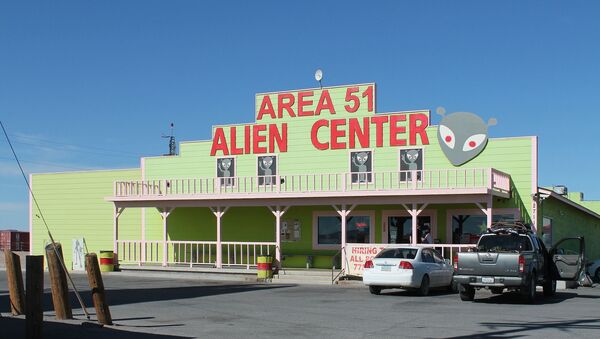 It all started as an apparent farce but has undoubtedly been blown out of proportion, as just under 2 million people signal their intent to storm one of the most highly protected facilities in the United States.

The man behind the ludicrous idea to raid the secretive Area 51 and "see them aliens" has opened up on what will happen next to his viral campaign.

"It started out as just a pure stroke of imagination, just funny. I wanted to do something cool out there now, that we have a bunch of people, but I don't want anybody to get hurt," Matty Roberts told KTNV Channel 13 Las Vegas.

Roberts, from California, is concerned that some overly enthusiastic fans of the alien cover-up theory from Facebook expressed willingness to die for the event. He noted that he didn't want to turn the prank into a "military base slaughter" and would like to see "something educational, maybe music and art. That's what I'm working on".

He showed up for the interview in a black cloak with ominous red clouds and a forehead protector, the signature costume of Akatsuki members, a criminal organisation from the hit anime Naruto.

DID YOU KNOW? The guy behind the 'Area 51' Facebook page, which has reached millions, lives in Bakersfield?

We talked to Matty about his actual "raid" plan, social-media buzz, and what exactly is a Naruto Runner? Hmmmm.

Tune into our 6 p.m. newscast for full story! pic.twitter.com/5LrcQ5ds6W

The satirical Facebook event he launched, titled 'Storm Area 51, They Can't Stop All of Us', suggests an unorthodox way of breaking in: "If we Naruto run, we can move faster than their bullets."

He was referring to the 'anime' running technique, which implies that a ninja can move much faster with their torso leaning forward and their arms tucked back.

The event, scheduled for 20 September, has become the latest Internet fascination. As of the time of writing, 1.8 million users had RSVP'd confirming attendance, while another 1.4 million marked themselves as 'interested'.

The Air Force, meanwhile, has held briefings on the Naruto running technique, according to Reddit know-it-alls.

Aliens in My Area?

Area 51 is a highly-classified US Air Force facility in the Nevada desert. Established in the 1950s, Area 51 was so closely guarded that the government only acknowledged its existence in 2013.

The base is believed to be a test site for top-secret aircraft and aviation technologies, including the U-2 spy plane in the 1950s and the B-2 stealth bomber.

However, a long-running conspiracy theory suggests that Area 51 is where the US government is keeping classified information about alien encounters, or even the aliens themselves.