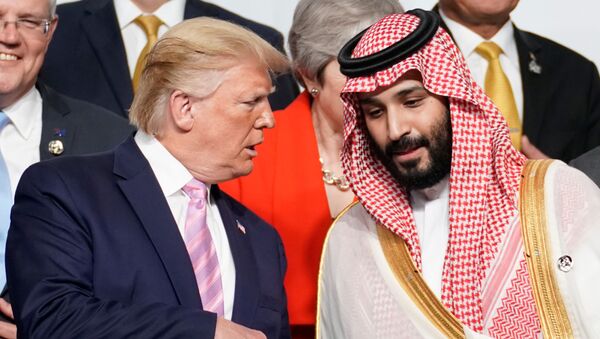 Earlier it was reported that five hundred US troops were slated to be deployed to the Prince Sultan Air Base, located to the east of the country’s capital of Riyadh, becoming reinforcements to US military and support personnel already on the site.

Saudi King Salman bin Abdulaziz Al Saud has reportedly approved stationing US troops in the kingdom in a bid to enhance security in the region, according to the state news agency SPA.

The decision aims "to increase joint cooperation in defence of regional security and stability and to preserve its peace," according to an official from the country's ministry of defence.

On Wednesday, CNN reported, citing defence officials, that the US president’s administration was prepared to send military personnel to Saudi Arabia.

According to the report, the Prince Sultan Air Base chosen for the troop deployment will also host fifth-generation US F-22 jets and other stealth aircraft.

It was highlighted that the site was chosen as it is located in a remote area and that it would take time for Iranian missiles to reach it, according to CNN.

Neither the US Department of Defence or Riyadh have commented on the report, although an official cited by CNN claimed that an announcement of the deployment was expected to take place next week.

Iranian Foreign Minister Mohammad Javad Zarif called the US plans a "symbolic move" that will not bring security benefit to any country in the region.

"Certainly, security in our region cannot be purchased from outside. We believe that countries in the region should provide their own security through cooperation and through regional integration, and not through trying to purchase it from outside. It’s not usually a tenable avenue to getting security," Zarif said, quoted by The National Interest.

On Thursday, US President Donald Trump claimed an American ship had destroyed an Iranian drone in the Strait of Hormuz. Tehran responded that the Iranian military has no information about losing an aircraft. Later Iran provided footage of the USS Boxer amphibious assault ship taken from an Iranian drone that the US earlier claimed had been downed by the military vessel to prove that the drone had safely returned to the Iranian air base.

The situation in the Persian Gulf and adjacent areas has noticeably worsened over the past few months. In May, several oil tankers were targeted by sabotage attacks off the United Arab Emirates' coast. The United States and its allies blamed Iran for the incidents, but Tehran denies involvement.

In June, two more oil tankers were hit by explosions in the Strait of Hormuz, which connects the Gulf of Oman with the Persian Gulf. The United States once again accused Iran of staging the attack and Tehran again denied the accusations.

Following this, the Iranian military reported that it had downed a US drone after the spy craft had violated Iran airspace. At the same time, the US Central Command claimed that its Navy drone had been shot down over the Strait of Hormuz while transiting international airspace.