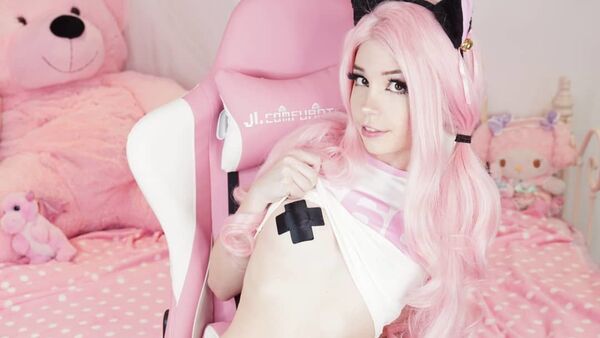 © Photo : belle.delphine/instagram
Subscribe
International
India
Africa
The cosplayer, who has 4 million Instagram followers, decided to cash in on her personal hygiene routine and announced a week ago that she is going to sell jars “for gamer boys” with what she claims is her bathwater. Despite speculations that the water is contaminated with herpes, she has decided to take her business venture to a new level.

Self-proclaimed gamer girl and cosplay model Belle Delphine has claimed she has sold a giant tub of her own bathwater for no less than $10,000 after jars containing the same liquid proved to be a complete success, a post on her Instagram suggests.

She made the very special announcement for those who are “EXTRA thirsty” on her social media on 10 July, saying that she is selling her bathwater one last time and posting a photo of herself soaking in a plastic container next to a lid, with the caption reading “Gamer Girl Bath Water Extreme”.

“I am selling bathwater ONE LAST TIME...except this time it's enough to drown in. If youre EXTRA thirsty then look no further, you also get a custom video of me bathing in the tub that I send to you!” she posted.

According to Delphine, the buyer will not only get the tub for the five-digit sum, but also a special video of her bathing in it, as well as access to material on her Patreon.

I am selling bath water ONE LAST TIME...except this time it's enough to drown in 💦 If youre EXTRA thirsty then look no further, you also get a custom video of me bathing in the tub that I send to you! ~SOLD OUT~

However, her Instagram post’s caption now ends with the tag “SOLD OUT”, suggesting that the offer wasn’t on the market for long.

The blogger launched her bathwater venture earlier in July, selling jars of “Gamer Girl Bath Water” for “THIRSTY gamer boys” in her brand-name store. She later claimed that the items were sold out within a couple of days.

i am now selling my BATH WATER for all you THIRSTY gamer boys 💦 check out my new shop where im selling stuff for you!! www.belledelphinestore.com

The touted success of her little side-business was marred, however, by gross allegations that the girl had sold not only her bathwater, but that it also contained herpes. Although the hoax first surfaced on a Twitter account impersonating the Daily Mail, with the headline “Over 50 People Have Reportedly Contracted Herpes After Drinking Instagram Star, Belle Delphine’s Bath Water”, it has been retweeted more than 17,000 times. According to comments under Belle's latest Instagram posts, many users seem to have believed the report.

She has fiercely denied the rumours, addressing the speculations on Instagram. Although she admitted that she used to get blisters when there's a change in weather, she has not had one in a year or two and that her buyers won’t get any.
“Nobody has been hospitalised from my bath water, or have gotten sick. All of these memes were posted before I even shipped any out”, she insisted.