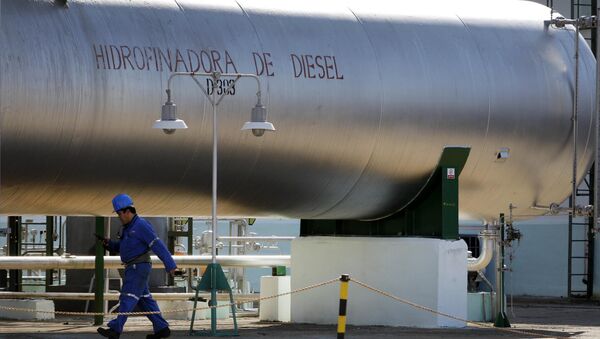 WASHINGTON (Sputnik) - The United States has imposed sanctions on Cuba’s oil and metals company Cubametales for its links to Venezuela, the US Department of the Treasury said in a press release.

"Today, the Department of the Treasury’s Office of Foreign Assets Control (OFAC) designated Cubametales, the Cuban state-run oil import and export company, for its continued importation of oil from Venezuela," the release said. "Cuba, in exchange for this oil, continues to provide support, including defense, intelligence, and security assistance, to the illegitimate regime of former President Nicolas Maduro."

US Treasury Secretary Steven Mnuchin said in the release that the sanctions will disrupt the Maduro administration's attempts to use Venezuelan oil as a bargaining tool to receive protection from Cuba and other "malign" foreign actors.

The Treasury Department explained that the Cuba-Venezuela Integral Cooperation Agreement facilitates the exchange of Venezuelan oil for Cuban services. Cuba provides several sectors of the Venezuelan economy with assistance such as medical services, technology and military assistance, the release said.

Cubametales is based in Havana and is responsible for all imports and exports of fuels and imports of additives as well as basic oil for lubricants to and from Cuba, the release noted.

The statement comes after US National Security Adviser John Bolton said in mid-June that Washington was considering new measures to prevent deliveries of Venezuelan oil to Cuba as part of the pressure on Havana over its support for President Nicolas Maduro amid the political crisis in the Bolivarian Republic.

Earlier in June, the United States banned cruises to Cuba and also barred US citizens from making educational trips there.

The US administration has extended sanctions against Cuba to put pressure on the Latin American country as part of the US effort to hold Cuba responsible for allegedly interfering in Venezuelan affairs.

Venezuela has been suffering from a severe political crisis since late January, when US-backed opposition leader Juan Guaido proclaimed himself interim president in a bid to oust President Maduro from power.

Maduro, in turn, has called Guaido a puppet of the United States and accused Washington of orchestrating a coup to force a government change in Venezuela and claim the country’s resources.

Cuba, along with Russia, China and other countries continue to support Maduro as the legitimately-elected president of Venezuela.