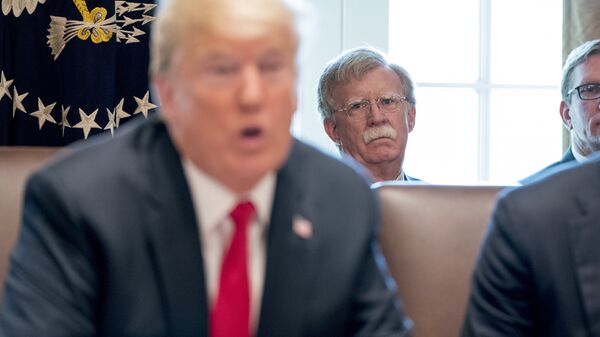 The US president's national security adviser, John Bolton, along with US Secretary of State Mike Pompeo, are known "hawks" when it comes to Tehran, with both Trump appointees often suggesting harsh steps to "deter" an alleged Iran threat.

"I disagree very much with John Bolton. […] John Bolton is doing a very good job, but he takes a generally tough posture. I have other people that don’t take that posture, but the only one that matters is me", Trump told reporters prior to his departure to Camp David.

Earlier, various media outlets suggested that the US president was dissatisfied with attempts by Bolton, whom Trump called a "hawk", to draw the US into wars with Venezuela and Iran.

The New York Times reported that Bolton, alongside Pompeo and CIA Director Gina Haspel, advocated for a missile strike against Iran in response to the downing of a US drone on 20 June. Trump aborted that strike minutes before the launch, citing high estimated casualties disproportionate to the zero losses that the US sustained in the drone incident. Instead, the US imposed additional sanctions against the Islamic republic on 22 June. 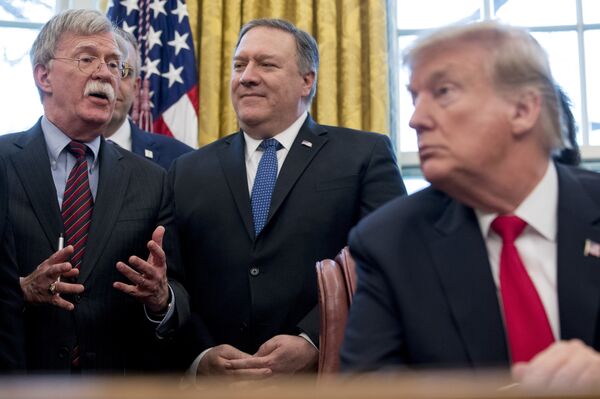 Despite opposing claims from the US, Iran revealed that the downed surveillance drone was in violation of Iran airspace and was repeatedly warned to change course. Tehran noted that it also had a US P-8 Poseidon spy plane in its crosshairs for airspace violations, but chose not to shoot it down to avoid casualties. Iran slammed the incident as a dangerous "provocation" by the US.

Relations between the two countries have spiraled downwards since the US withdrew from the 2015 Iran nuclear deal in May 2018 and re-imposed sanctions against Iranian banks and the nation's energy industry. Washington also ramped up its military presence in the Middle East, adding around 2,500 troops, B-52 bombers, a Patriot Missile battalion and more drones.

Tehran harshly condemned the US military build-up. Iranian Supreme Leader Ali Khamenei stated that while his nation does not seek war with Washington, it will "resist" aggressive moves.