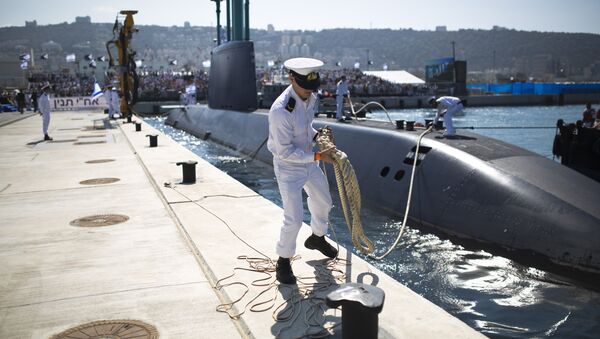 © AP Photo / Amir Cohen
Subscribe
The development comes amid simmering tensions between China and the United States, who have been embroiled in an ongoing trade dispute since June 2018. Along with the tariffs row, Washington has targeted the Chinese tech sector, blacklisting Huawei and dozens of affiliated firms.

The Senate Armed Services Committee passed a bill on Thursday that expressed “serious security concerns” over a contract allowing a Chinese company to operate in the Israeli port of Haifa, which has regularly hosted joint US-Israeli drills and has long been a docking point for the US Sixth Fleet, Haaretz reported.

The bill, which is said to have been included in the National Defence Authorisation Act, looks into the deal between the Israeli government and the Shanghai International Port Group, under which the Chinese business could operate the port for 25 years starting in 2021.

According to Haaretz, the legislation also pointed out that US authorities should “urge the government of Israel to consider the security implications of foreign investment in Israel”, without, however, directly naming China in this clause.

Israeli media outlets have previously reported that a Chinese-run seaport could force the US Navy to dock its ships elsewhere since they might jeopardise US national security.

“The Chinese port operators will be able to monitor closely US ship movements, be aware of maintenance activity, and could have access to equipment moving to and from repair sites and interact freely with our crews over protracted periods. Significantly, the information systems and new infrastructure integral to the ports and the likelihood of information and electronic surveillance systems jeopardise US information and cybersecurity”, retired Admiral Gary Roughead told The Jerusalem Post in December 2018.

The bill’s reported adoption comes against the backdrop of an escalated trade war between China and the United States, with Washington unveiling a list of additional Chinese goods worth $300 billion that will be exposed to increased 25 percent tariffs.

The Chinese side, for its part, has warned that it would impose reciprocal tariffs on $60 billion worth of American products.

What is more, the US blacklisted Chinese tech giant Huawei and its 70 affiliates, thereby banning American companies from selling components to the Shenzhen-based firm without a government license. The current US administration has accused Huawei of spying on behalf of the Chinese authorities through its devices and stealing commercial information – something that the tech mammoth has consistently denied.

Beijing and Washington have been mired in an ongoing trade war since June 2018 when President Donald Trump announced 25 percent tariffs on up to $50 billion worth of Chinese goods in order to fix what he has consistently described as China’s “unfair trade practices”. Beijing, likewise, hit back with a series of tit-for-tat measures.