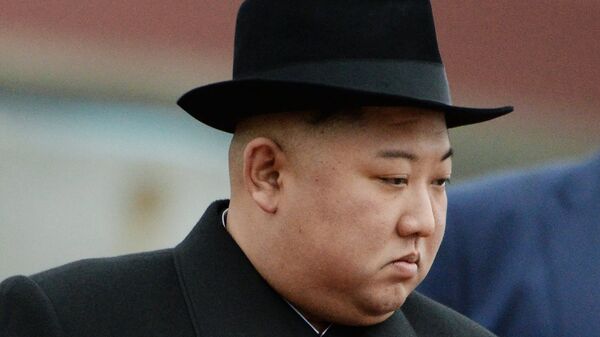 © Sputnik / Vitaly Ankov
/
Go to the mediabank
Subscribe
International
India
Africa
A South Korean newspaper speculated last month that Kim Jong-un executed at least five Foreign Ministry officials, including the DPRK's US envoy, following the failed Hanoi summit with Donald Trump in February. These reports have, however, been disputed by Korea Risk Group CEO Chad O'Carroll, who argued that the envoy was alive and well.

British tabloid Daily Star has cited an unnamed UK intelligence officer as claiming that North Korea's leader has pulled a "classic Kim" and executed a general by throwing him into a fish tank teeming with piranhas imported from Brazil.

In what may sound like a lame movie plot twist, Kim Jong-un is alleged to own a huge fish tank built inside one of his presidential palaces, namely Ryongsong Residence, as part of his purported order to aides to come up with new sophisticated methods of execution.

But before being eaten by a pack of predatory fish, the general, who allegedly plotted a coup against Kim, had his arms and torso cut open with knives, per Daily Star.

In fact, the media outlet speculated that the idea was derived from the 1977 James Bond movie, "The Spy Who Loved Me", in which ubervillain Karl Stromberg killed off his opponents by feeding them to sharks living in the aquarium.

READ MORE: US Comedian Asks Panel 'What if Trump Killed Pompeo and Bolton’

Daily Star's report has, however, left social media users unimpressed, as they pointed out that the entire story smells fishy. Many suggested that the general will show up in public within days and sarcastically wondered if it was a James Bond audition:

You just making up this shit now

The media are obviously seeing just how gullible the general public are.

We gonna see this general walking about next week?

All are lies. He Will resurface few years time

Must be a massive James Bond fan

The British media outlet's allegations follow a report by South Korea newspaper The Chosun Ilbo, which claimed that Kim Jong-un had purged at least five Foreign Ministry officials, including Kim Hyok-chol, the country's special envoy to the US, in the wake of the failed Hanoi summit with US President Donald Trump in late February.

Shortly after these reports emerged, Korea Risk Group CEO Chad O'Carroll took to Twitter, arguing that a source had told him that Kim Hyok-chol had been seen at the foreign ministry in Pyongyang the other day.

Source told me this week that Kim Hyok Chol had been seen at the foreign ministry recently in Pyongyang... https://t.co/ADY7JiehY4

The much-anticipated second official meeting between Trump and Kim came to an abrupt end in late February without an agreement after Washington refused to offer Pyongyang any relief from economic sanctions.

Trump at the time told reporters that North Korea "wanted the sanctions lifted in their entirety" and that "we couldn't do that".

The two heads of state held their first-ever meeting in June 2018 in Singapore, which ended with a four-point declaration that paved the way toward renewed bilateral relations between the two countries and initiated denuclearisation talks, among other goals.