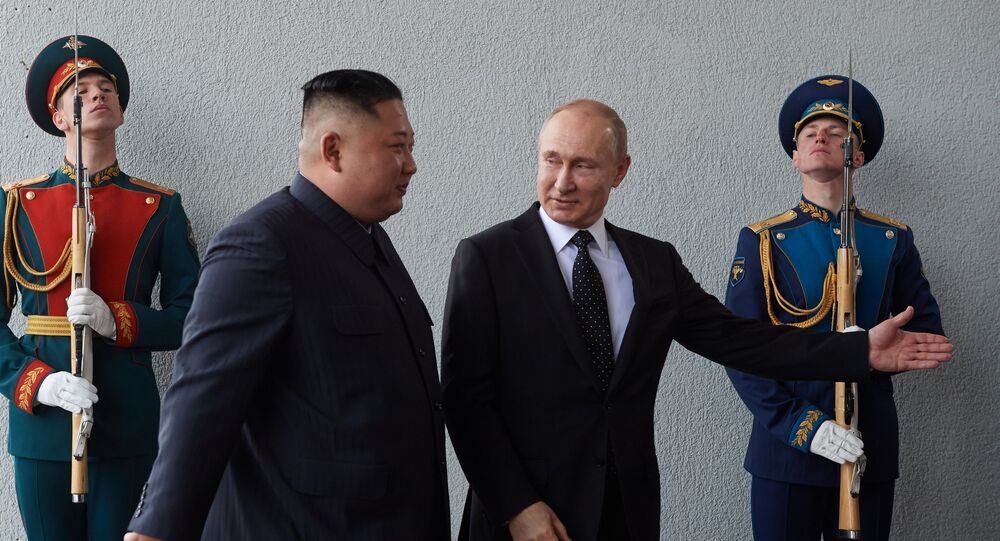 "Russia sided with the U.S. on the North's denuclearisation, but Moscow understood Pyongyang's stance on how to implement the denuclearisation. That means North Korea and Russia seemed to have a common ground for a phased, incremental approach to the North's nuclear disarmament," NIS said during a briefing with the South Korean parliament's intelligence committee.

The intelligence service noted that it meant that North Korea might want to resume denuclearisation talks with the United States after the failed Hanoi summit between Kim and US President Donald Trump.

Lee Hye-hoon, the head of the intelligence committee, in turn, expressed doubt that Russia would be able to make a real difference in denuclearisation talks amid the existing sanctions.

"Russia may have created certain conditions for itself to intervene in the Korean Peninsula issue, but under the current sanctions system, Moscow has little part to play," Lee was quoted as saying by the outlet.

© Sputnik / Valery Melnikov
Trump Welcomes Statements Made by Putin About North Korea
On April 25, Putin and Kim held their historic summit in the Russian Far Eastern city of Vladivostok. The meeting came two months after the North Korean leader's fruitless trip to Vietnam for a summit with Trump.

After the Hanoi summit, denuclearisation talks between North Korea and the United States reached a deadlock, since Washington demands that Pyongyang completely dismantles nuclear facilities in the country in order to get sanctions relief, and North Korea wants a part of restrictions to be lifted before denuclearisation begins.

China is also one of the countries involved in efforts aimed at reaching North Korea's denuclearisation.