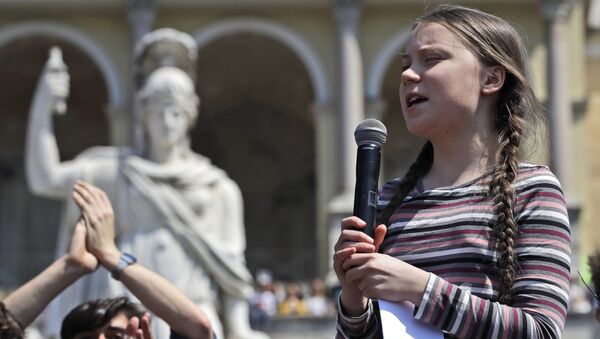 © AP Photo / Alessandra Tarantino
Subscribe
International
India
Africa
"I'd rather report her mother to the police than review her book for the newspaper. It's horrifying reading," Danish journalist Mikael Jalving has said of the book "Scenes from the heart" about Swedish teenage climate activist and icon Greta Thunberg, penned by her own mother.

Jalving dismissed Thunberg's mother Malena Ernman's book "Scenes From the Heart" as scary reading and rated it only one star.

"The book contains a story of failure," Jalving told the Danish newspaper BT.

Jalving called Thunberg "poor thing" and stressed that she has previously suffered from depression and an eating disorder, whereas her current diagnoses include obsessive-compulsive disorder (OCD) and Asperger's syndrome. Beata, her little sister, has also been diagnoses with attention deficit hyperactivity disorder (ADHD), Asperger's and OCD.

READ MORE: Swedish Teen Activist to Skip Year at School to Travel to US 'For Climate Sake'

According to Jalving, Ernman's book conjures a picture of a family that's disintegrating. Jalving believes Ernman focuses too much on making Greta Thunberg a star instead of addressing why both her daughters are so sick and feel an extreme urge to save the world instead of dealing with their own teenage lives.

Jalving partly attributed the list of the both daughters' diagnoses to Ernman's career as an opera singer, which has resulted in the family living on the go with no permanent residence.

"Think if Greta's diagnoses are about never having roots in her childhood. They have been moving around like a family of jugglers. It is a very celebrated life on the surface. But the daughters have been dragged along," Jalving explained.

Mikael Jalving believes Thunberg is hostage to her mother's project.

"I think 'poor girl'. She would like to be an adult, but has not been allowed to be a child. Her childhood is gone, and now she a kind of grown-up child. And now that her mother is not as successful anymore, I suppose her career has come to a standstill, which is why she has kidnapped her eldest daughter and is using her skills," Jalving said.

While praising Thunberg's relentless efforts to save the environment, he ventured that she is part of a "devilish covenant" with her mother.

"The family is in a deep crisis, and the mother has not understood it at all. The book should have never been published, but instead one should have tried to help the family. The book is a cry for help," Mikael Jalving concluded.

Greta Thunberg is a Swedish school girl who rose to international fame for her weekly "school strikes" held outside of the Swedish parliament. In recent months, hundreds of thousands of students in over a hundred countries across the globe have followed her example.

Thunberg's unabating activism, coupled with favourable press coverage and applause from politicians and celebrities, has propelled her to stardom. In recent months, Thunberg met with top EU officials, businessmen, famous people and even the Pope and was decorated with a number of prizes and awards. At only 16, she has been named the woman of the year by several Swedish newspapers and has even been nominated for the Nobel peace prize.