US Navy to Run First Sea Trials of RAILGUN, Catching Up With China 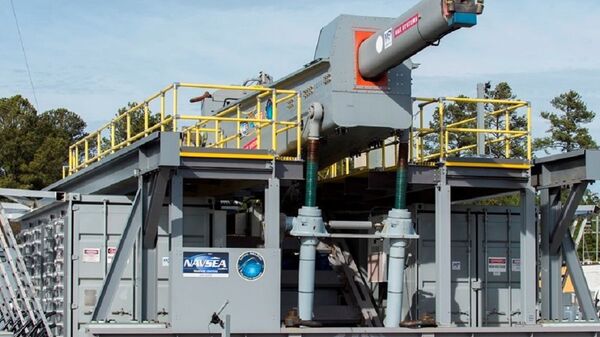 © Photo : Naval Sea Systems Command
Subscribe
International
India
Africa
The Pentagon's pet project aimed at developing a gun capable of firing projectiles without gunpowder at speeds faster than that of sound hasn't shown much progress lately, as media have reported that the military has been considering closing the $500 million programme.

The US Navy has revealed in its Northwest Training and Testing Draft Supplemental Environmental Impact Assessment that it plans to run the first sea trials of an electromagnetic railgun – a weapon that uses electromagnetic energy to accelerate projectiles up to six times the speed of sound. The test is expected to take place no earlier than November 2020 at the Navy's Northwest Training and Testing Study Area in the north-eastern Pacific Ocean.

The document indicates that the experimental weapon will be tested on "air- or sea-based targets" using both explosive and non-explosive projectiles. The gun will be mounted on a surface vessel, the model of which has not been specified.

This will be the first time that the US Navy's railgun is tested - if the trials aren't aborted. The US military had previously intended to run sea trials of the weapon in 2016, planning to use the Spearhead-class USNS Trenton for that purpose, but the tests never happened. A year later, the American media outlet Task & Purpose reported that the Pentagon was considering terminating the development programme and redistributing the funds to other projects.

At the time, the railgun was reported to have two major issues. Namely, it required massive amounts of power to fire even a single shot, with only the Zumwalt-class destroyers being capable of it. This was further exacerbated by the fact that plans to build over three dozen Zumwalts were slashed to just three.

What is more, the railgun gradually destroyed itself with every shot it made. Initially, the weapon was capable of firing several dozen times, with the number increasing to 400 by 2014. It was unclear at the time, however, whether the number could be raised further.

The US has been developing the railgun for over a decade and spent over $500 million on doing so, but Washington has not been alone in this aspiration. Currently, the US is competing with China in the field. This year, Chinese media reported that a railgun, installed on a Type 072III Yuting-class ship, had passed some preliminary sea trials.