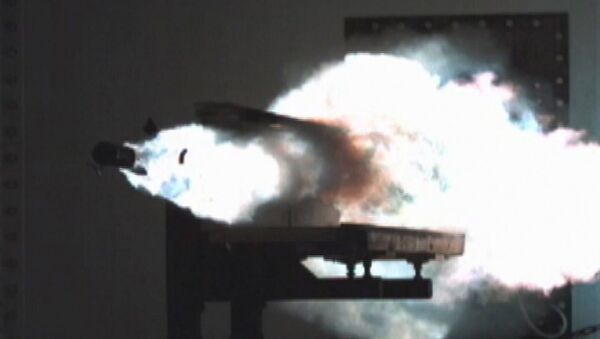 A Chinese Type 072II-class landing ship armed with a large electromagnetic railgun (ER) mounted on its bow departed from the coast in order to set sail over the open ocean, according to reports.

Both images of the Haiyan Shan feature the number 936 on the front starboard.

​Electromagnetic railguns are considered innovative since they can fire projectiles at speeds several times the speed of sound and reach far-away targets, powering the rounds with electrical pulses. That the weapon does not rely on gunpowder or other chemical propellants is considered revolutionary.

Beijing indirectly confirmed extensive work being done on the next-generation naval weaponry program in March 2018, according to China's Global Times publication. Zhang Xiao of the PLA Naval University of Engineering was quoted saying that a repeating power supply mechanism to replenish the gun's energy reserves in between firing off rounds had been completed. "The repeating power supply system is the power source of an electromagnetic railgun," Zhang said in the Global Times report.

A 2018 US intelligence report on Chinese military capabilities leaked to CNBC demonstrated that some US officials expect China to install electromagnetic guns on destroyers as soon as 2025. This would amount to a "strategic coup" for Beijing against the US, which is attempting to catch up with Chinese advances in hyper-velocity projectile technology. Dr. Thomas Beutner of the US Office of Naval Research's Naval Air Warfare and Weapons Department said the railgun and directed-energy weapons "are the future of maritime superiority" in 2017, according to a report in the US Department of The Navy's Information Technology Magazine.

The United States has spent hundreds of millions on its own electromagnetic railgun program since the mid-2000s, though the Strategic Capabilities Office (SCO) inside the Pentagon has reportedly stifled funding of the weapon. Instead, the SCO has pushed for diverting resources to the Hyper Velocity Projectile program, which places a focus on developing cheaper, low-drag projectiles that could be fired from an ER, or perhaps from other gun systems.

"People at SCO don't want to fund the railgun because they're simply not buying it," an unnamed Capitol Hill staffer told Task and Purpose in December 2017.

The 2019 National Defense Authorization Act provided for $20 million in funding for the US Army's separate railgun program, the news outlet notes. Further, the 2019 NDAA stipulated the Innovative Naval Prototypes Advanced Technology Program to receive an additional $20 million for the express purpose of building a shipboard electromagnetic railgun demonstrator. These two factors suggest the Pentagon has yet to throw in the towel with respect to the weapon.