Media outlets worldwide are abuzz over photographs of a strange-looking cannon installed on a Chinese warship.

After lengthy discussions, experts eventually agreed that the gun, unusually large and different from any other weapon in China’s naval arsenal, was an electromagnetic railgun installed on the landing ship Haiyang Shan.

Even though Beijing has failed to confirm the new weapon’s existence, several newspapers, including the Asia Times, have quoted Chinese military officials as saying that sea tests of China’s indigenous electromagnetic railguns are now under way. 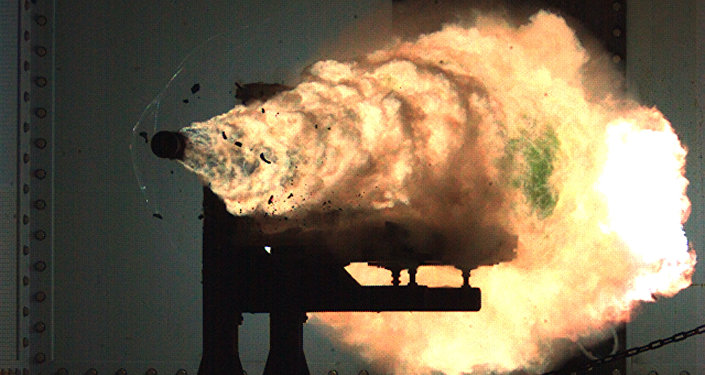 Zhang Xiao, associate research fellow at the People’s Liberation Army’s Naval University of Engineering, told the Asia Times that  after some 50,000 tests of its onboard systems, including of pulsating direct current power system, the Haiyang Shan sailed down the Yangtze River to reach the South China Sea for further trials.

She did not say exactly which systems were being tested on the high seas and if the railgun had actually been fired.

China has thus become the first country in the world to mount a railgun, albeit a prototype, on a warship.

The US Navy’s Zumwalt-class guided-missile destroyer was to be the first to carry an electromagnetic railgun sometime this year, but the Navy shelved the plan opting instead for the 155mm Advanced Gun System (AGS) designed to fire the advanced Long Range Land Attack Projectile, a GPS-guided shell, 60 nautical miles away.

Mounting a railgun on the Haiyang Shan does not mean, however, that the weapon will become standard equipment for the Chinese Armed Forces.

Even if the tests are a success, creation of mass-produced electromagnetic railguns could take years.