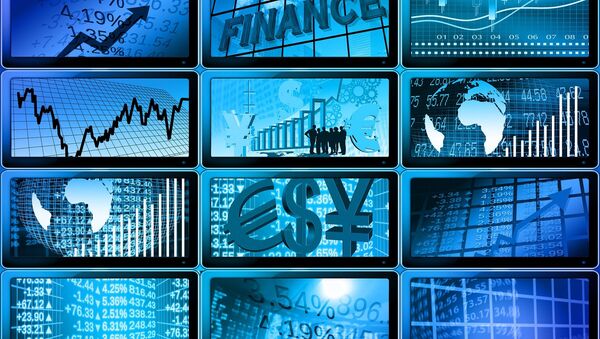 © Photo : Pixabay
Subscribe
Economists at a major international development agency are warning of a slowing global GDP, a rise in poverty, and the threat that entire industries may collapse as a result of the mounting tensions in global trade.

Kristian Rouz – A new report from the Organisation for Economic Cooperation and Development (OECD) warns against further escalations in international trade tensions, protectionist tariffs, and the excessive use of non-tariff restrictions, suggesting that the pace of global economic expansion could suffer as a result.

OECD experts found that even when trade restrictions are introduced in compliance with international standards, such measures tend to affect the volume of global trade, weighing on consumer demand worldwide, and hindering total economic output in both advanced and developing nations.

“Let’s avoid complacency at all costs,” OECD Secretary-General Angel Gurria said. “Clearly the biggest threat is through the escalation of trade restriction measures, and this is happening as we speak. This clear and present danger could easily have knock-on effects.”

Gurria said the main concern is the ongoing trade dispute between the US and China, which is already affecting third-party countries as well. However, the OECD believes disruptions in trade between smaller economies could add to the downward pressure on the pace of global economic growth.

China Denies Agreeing to ‘Extravagant’ US Trade Deal Demands – Report
Experts say trade tensions affect international supply chains, and could potentially wipe out entire industries in certain countries – as the globalisation of trade over the past 30 years has made some countries excessively reliant on exports and imports.

Disruptions in well-established trade links could prompt some nations to try to substitute imports with domestic products, and sell their otherwise export-oriented products domestically, but existing imbalances in output volumes could make such attempts quite painful for years to come.

As a result, employment and wages in the export-oriented industries might suffer, while the rising cost of imports could drive inflation across many economies, impairing the standards of living of hundreds of millions of people

OECD economists believe that global GDP will expand by 3.2 percent this year, its slowest in three years, and below the 5-percent average expansion at the beginning of the 2000s.

Experts also called on the US and China to remove their recently-imposed tariffs, which would, they believe, allow the world economy to pick up momentum next year. However, the Trump administration has made it clear it wouldn't tolerate China's alleged practices of dumping cheaper products in the American market, as well as the alleged abuse of intellectual property rights, and other perceived transgressions.

For its part, China has struggled to reform its economy for the past few years, to make it less reliant on foreign trade. Such efforts at 'growth rebalancing' have produced limited results so far.

Japan Q1 GDP Beats Expectations Despite Weak Consumer Spending
However, in the wake of higher US tariffs and Beijing's reciprocal measures, the Chinese economy could adapt to this new reality, with domestic demand becoming an increasingly prominent source of its GDP growth.

There is still little certainty regarding whether China, along with other emerging markets, will be able to successfully adapt to this new reality. Meanwhile, economists say the well-being of the majority of the world's population depends on trade, and the lingering conflicts threaten to increase global poverty.

Additionally, trade uncertainty is hurting investment across emerging markets, with international wealth managers opting to pull their money from countries at risk, and seeking less profitable, yet safer options in the US, Western Europe, or Japan.

"The current cycle of trade disputes is hurting manufacturing, disrupting global value chains and generating significant uncertainty that is weighing on investment decisions, and highlights the risk of further disruption," the OECD said in a recent report.

Economists believe that if trade tensions escalate, the majority of third-world countries will no longer be able to grow their economies through commodity exports, the exploitation of dirt-cheap factory labour, or unlimited borrowing – or a combination of the three.

000000
Popular comments
Yes the power is shifting to THE EAST.
Chamroosh
27 May 2019, 06:02 GMT
000000
MR. XI you have to set up the GLOBAL BANK OF THE EAST and change Center of the bank every FIVE years to different country in ASIA.
Chamroosh
29 May 2019, 05:36 GMT
000000
Newsfeed
0
New firstOld first
loader
LIVE
Заголовок открываемого материала
Access to the chat has been blocked for violating the rules . You will be able to participate again through:∞. If you do not agree with the blocking, please use the feedback form
The discussion is closed. You can participate in the discussion within 24 hours after the publication of the article.
To participate in the discussion
log in or register
loader
Chats
Заголовок открываемого материала
Worldwide
InternationalEnglishEnglishMundoEspañolSpanish
Europe
DeutschlandDeutschGermanFranceFrançaisFrenchΕλλάδαΕλληνικάGreekItaliaItalianoItalianČeská republikaČeštinaCzechPolskaPolskiPolishСрбиjаСрпскиSerbianLatvijaLatviešuLatvianLietuvaLietuviųLithuanianMoldovaMoldoveneascăMoldavianБеларусьБеларускiBelarusian
Transcaucasia
ԱրմենիաՀայերենArmenianАҧсныАҧсышәалаAbkhazХуссар ИрыстонИронауОssetianსაქართველოქართულიGeorgianAzərbaycanАzərbaycancaAzerbaijani
Middle East
Sputnik عربيArabicArabicTürkiyeTürkçeTurkishSputnik ایرانPersianPersianSputnik افغانستانDariDari
Central Asia
ҚазақстанҚазақ тіліKazakhКыргызстанКыргызчаKyrgyzOʻzbekistonЎзбекчаUzbekТоҷикистонТоҷикӣTajik
East & Southeast Asia
Việt NamTiếng ViệtVietnamese日本日本語Japanese俄罗斯卫星通讯社中文（简体）Chinese (simplified)俄罗斯卫星通讯社中文（繁体）Chinese (traditional)
South America
BrasilPortuguêsPortuguese
NewsfeedBreaking
12:24 GMTRussia's SCO Envoy Says Taliban Recognition Not on Agenda, While Dialogue is Important
12:12 GMTLava Flow Destroying Settlements Forces Evacuation as La Palma Volcano Continues to Erupt
12:10 GMTUNSC Discussing Security and Climate Change
12:08 GMTBalls to the Wall: Oklahoma Man Gets 12 Years in Prison for Failed Castration of Volunteer
12:02 GMTThe Spy Who Abused Me: Director of Latest Bond Movie Calls Sean Connery's 007 a 'Rapist'
11:56 GMTIt's a Gas!... Russia Blamed for Europe's Fuel Crisis
11:45 GMTWhen It Rains, It Pours: UK Defence Ministry Reportedly Allows Another Afghan Data Breach
11:40 GMTMan United Players Frustrated as the Team Out of Carabao Cup After Stunning Loss to West Ham
11:01 GMTPoland to Deploy 250 US-Supplied Abrams Tanks on Eastern Border, Defence Minister Says
10:50 GMTGerman Greens Leader Accuses Russia of Exacerbating Gas Crunch
10:38 GMTRIP 'Godfather of Black Cinema': Filmmaker Melvin Van Peebles Dies at 89
10:28 GMTBoris Johnson Reveals Why He Wants to Be Renamed in Honour of Ancient Greek God of North Wind
10:22 GMTHis Royal Highness No More? UK Queen Could Strip Prince Andrew of HRH Title Amid Sex Assault Case
10:02 GMTJohnny Depp Says No One is 'Safe' From Cancel Culture as He Hints That 'MeToo' Got Out of Hand
09:51 GMTPutin, Zelensky to Meet When Both Are Ready, Kremlin Says
09:49 GMTMarseille Football Team Blames Mass Brawl of Spectators on Provocation by Angers Fans - Video
09:31 GMTGeneva to Host New Round of Russian-US Strategic Stability Talks Next Week, American Ambassador Says
09:24 GMTUS House Committee Approves Amendment Recommending Sanctions Against Russian Officials
09:23 GMTSCO to Coordinate Effort to Prevent Threats Coming From Afghanistan, Russian General Staff Says
09:12 GMTAll Crew Members From Crashed Russian An-26 Plane Perished, Remains Found