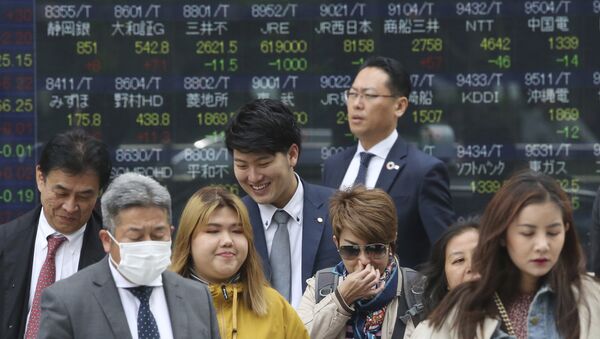 Kristian Rouz — The Japanese economy unexpectedly gained momentum in the first quarter in defiance of previous expectations of a further slowdown and a possible recession. The rebound comes despite the lingering concerns over international trade tensions, as Japan's imports fell quicker than exports, pointing to a gradual rebalancing towards domestically-driven expansion.

According to the Japanese government, the nation's GDP rose by 2.1 percent between January and March. The reading far exceeds consensus expectations made previously, with most analysts suggesting the economy would contract by 0.2 percent.

The solid rebound in GDP growth, along with a solid labour market, and strong manufacturing output could support the government's plans to increase the value-added tax (VAT) later this year. However, a detailed breakdown of the GDP report suggests that the pace of expansion might not last very long.

"All of the most important components of GDP are negative," Hiroaki Muto of Tokai Tokyo Research Centre said. "The economy has already peaked out, so we are likely to have a mild recession. No one would object to delaying the sales tax hike."

The report found Japan's exports had decreased by 2.4 percent, the steepest decline since 2015. Meanwhile, imports contracted by 4.6 percent — the most dramatic plunge in a decade.

Mainland China Q1 GDP Beats Expectations Amid Central Bank Stimulus
Japan's foreign trade dynamics suggests global trade tensions could take a toll on the nation's economic growth moving forward — yet, at the same time, the drop in imports could point to a gradual consumer pivot to domestic goods and services.

The Japanese cabinet of Prime Minister Shinzo Abe is heatedly debating a proposed increase in the sales tax to 10 percent from the current 8 percent. Some officials say tighter fiscal policies are necessary to stave off the possible negative impacts of the ultra-loose monetary policies of the Bank of Japan (BOJ) — such as possible asset bubbles, or a rapid credit expansion.

Others say Japan's economic growth is fragile, and the tax hike should be delayed. A higher sales tax, they argue, could further impair consumer confidence and effective consumer demand — a point supported by the GDP report's findings.

Japan's private consumption fell 0.1 percent in 1Q19, while a key measure of business investment, capital expenditures, or capex, slid 0.3 percent — all this despite the B0J's zero-to-negative interest rates and ultra-accessible credit in Japan's domestic market.

"But when I look at the numbers closely, they are not strong," Hiroyasu Ando of Sumitomo Mitsui Banking said. "Household spending and capital investment are negative, which shows that internal demand during the quarter was sluggish. There are some worrisome factors."

The on-going deterioration of the domestic and international economic environment calls for a delay in the tax hike, some policymakers argue. However, Economy Minister Toshimitsu Motegi said in the report's aftermath that the government is still on course to hiking the VAT in October.

"There's no change to our view that the fundamentals supporting domestic demand remain solid", Motegi said.

"Consumer spending is likely to remain weak, because wages are not rising that much", Kentaro Arita of Mizuho Research Institute said.

Many economists believe Japan's GDP growth could be zero in the second quarter. However, if the island nation strikes a trade pact with the US in the coming months, or the US and China reach an agreement to resolve their trade dispute, Japan could enjoy a windfall of trade revenues.

However, uncertainty still lingers, and many Japanese officials, investors, and business owners are still prepared for the worst-case scenario, planning for two quarters of a recession or stagnation this year.